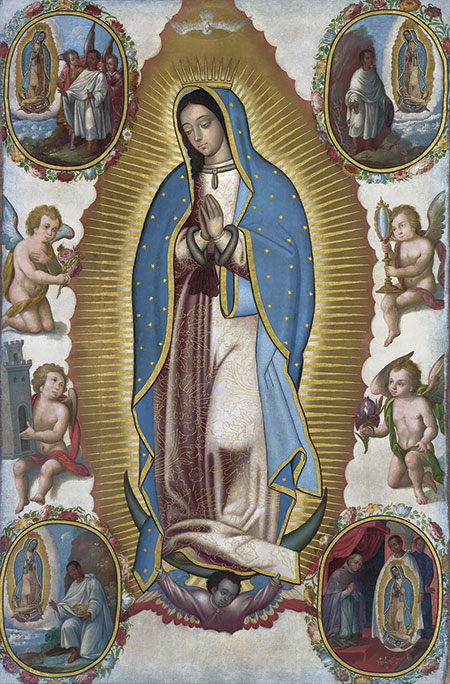 [The Virigin of Guadalupe / Wikimedia]

THIS IS HOW the story goes: Early in the morning of December 9, 1531, Cuauhtlatoatzin, a Mexican peasant in his fifties who had been baptized as Juan Diego, was on his way to catechism class at a church on the outskirts of Mexico City. His way took him over the hill Tepeyac, which before the Spanish conquest had been sacred to the earth goddess Tonantzin.

As he approached the hill, he heard singing like birdsong, but far more beautiful than the song of any birds he knew. When the singing stopped, he heard a voice calling his name: “Juan, dearest Juan Diego.”

At the top of the hill, Juan Diego met a “maiden” with shining clothing who introduced herself as “the perfect ever-virgin holy Mary, mother of the one great God of truth who gives us life.” She asked him to build her a house on the hill.

Juan Diego trotted off to the bishop to tell him what the Virgin had requested, but the Spanish bishop and his servants were reluctant to believe an “Indian’s” testimony. The bishop asked for a sign, and the Virgin promised to give one, but on the day Juan Diego was supposed to meet her to receive the sign, his uncle became terribly sick and appeared to be dying.

Juan Diego set out for a priest, but on his way over the hill of Tepeyac, he met the Lady again. She promised him that his uncle would recover. She also gave him the sign the bishop had requested: his tilma, or mantle, filled with miraculously blooming flowers. When he unloaded the flowers in front of the bishop, there on the tilma appeared the image of the Virgin. The miraculous image is preserved to this day in the basilica built on the spot where the Virgin appeared to Juan Diego.

“The hollow of my mantle”

The earliest published version of this narrative dates from 1648, in Spanish, followed a year later by a Nahuatl version, the Nican Mopohua. Manuscript versions go back to the mid-1500s. There was a shrine at the Hill of Tepeyac, later known as Guadalupe, by the mid-sixteenth century; that much is clear from contemporary references (some hostile).

But some people, including a priest who was in charge of the shrine at Guadalupe for years, have questioned whether Juan Diego was a real person, as the earliest references do not mention him or the traditional origin of the image. One preacher in the 1550s claimed that the picture had been “recently” painted by “an Indian.” The Spanish bishop at the time, Juan de Zumárraga, never mentions the appearance of the Virgin and in fact remarked once that Christ does not want any more miracles.

The Franciscans who dominated religious life in Mexico in the mid-sixteenth century were generally hostile to miraculous claims, which they saw as a form of syncretism with paganism. After the Council of Trent and the arrival of the Jesuits in Mexico, the church’s attitude to the shrine became much more favorable.

Whatever the truth of the traditional story, devotion to the Virgin of Guadalupe became a symbol of Mexican identity, and she is now the patron saint of Mexico. A devotion to a shrine in Spain called “Guadalupe” already existed but some have also described an Aztec etymology for the word Guadalupe meaning “She who crushes the serpent.”

The dark skin of the Virgin along with the mixture of European and Mexican iconography in the image make it a symbol of the fusion of native and Spanish cultures. Since the nineteenth century, the image has been a focal point for Mexican nationalism, which emphasizes its native rather than its Spanish elements and the indigenous devotion to it.

Today many immigrants to the United States carry this image with them; its presence in a Catholic church is a sign of welcome to Latin American Catholics. Millions of the faithful take comfort from the words ascribed to the Virgin in the Nican Mopohua:

Am I not here, I, who am your mother? Are you not under my shadow and protection? Am I not the source of your joy? Are you not in the hollow of my mantle, in the crossing of my arms? Do you need something more?

Christianity in Latin America has a rich and complicated, history encompassing many different countries, traditions, and political situations. This timeline offers a brief introduction to both church (in bold) and state (in italic).