Bach, did you know?

BAROQUE: The period of music history from 1600 to 1750, beginning with the birth of opera and ending with the death of Bach. This was an era characterized by flamboyance and vivid expression. It was also the golden age of Lutheran church music.

BWV: Bach- Werke-Verzeichnis or Bach Works Catalog, the numbering system used to refer to Bach’s compositions There are over 1,000 BWV items in all—a testimony to Bach’s astounding output. Bach was modest about his achievements, offering the classic understatement, “1 was obliged to be industrious; whoever is equally industrious will succeed equally well.” In his lifetime he was known as a good church musician, not as a composer, and he was largely forgotten until Felix Mendelssohn performed the St. Matthew Passion in Berlin in 1829. The Bach Society, established in 1850, began collecting and publishing Bach’s works—a century after his death.

PULL OUT ALL THE STOPS: Put all of one’s energies into something. This literally refers to pulling out the “stops” in a pipe organ so the maximum amount of air is flowing through the pipes and the organ is playing with the loudest volume. Bach not only “pulled out all the stops” in his music, proving himself to be one of the most creative and prolific composers in history, but he was also an expert in organ design and was called upon to examine new or repaired organs all over Germany. Bach’s first biographer recorded, “The first thing he did in trying out an organ was to draw out all the stops and to play with the full organ. He used to say in jest that he must first of all know whether the instrument had good lungs.”

KAPELLMEISTER: Literally “chapel master.” However, in Bach’s time it referred to the person in charge of the music at court. So ironically, the only time in his life when Bach was called “chapel master” was when he worked for the Prince of Anhalt-Cothen and had no church music duties.

CANTOR: Literally “singer.” In Bach’s time this term referred to someone who taught (not just music) in a school and selected, composed, and directed the music for liturgical and civic occasions. So Bach, during his nearly 30 years in Leipzig, was supposed to be as much a teacher as a church musician. But he got permission to hire assistants for his academic duties so that he could shift his energies to directing music in the churches—a shift that did not meet the approval of all of the authorities. One of them, when hiring Bach’s successor, said, “The school needs a cantor, not a Kapellmeister.”

CANTATA: A term originally used in the 17th century for vocal chamber music. Although Bach rarely used the term for any of his compositions, it has become the standard designation for his multi-movement works for choral and/or solo voices, usually based on the Gospel lesson of the Sunday or feast day for which they were written. Bach wrote more than 300 sacred cantatas, though only about 200 have survived. He also wrote a few secular cantatas for entertainment and celebratory occasions at court, the university, or wealthy households. One of his best– known pieces, “Sheep may safely graze,” is from Cantata 208, which he wrote for the birthday of the Duke of Weissenfels. The “sheep” originally meant the citizens of Weissenfels who could “safely graze” under the gracious care of their duke. When we hear the piece today, we generally think of sheep under the care of the Good Shepherd. Bach, no doubt, would approve.

CHORALE: Lutheran congregational hymn. Pieces commonly known as “Bach chorales” are four-part harmonization that Bach made of chorale melodies and incorporated into his cantatas and Passions. The melodies are usually not by Bach.

COUNTERPOINT or POLYPHONY: A kind of music in which all the parts are more or less equal in importance. No one part carries the melody and no part is merely accompaniment.

FUGUE: A particular type of counterpoint based on a melodic theme (called the subject) that is played alone at the beginning of the piece and then imitated by other voices or parts. As the piece unfolds, the subject appears periodically in various parts, sometimes overlapping. Bach was the supreme master of the fugue. Near the end of his life he was composing The Art of Fugue, a collection of fugues all based on the same subject. Unfortunately, Bach died before he could finish it. The final, incomplete fugue ends just after Bach added a four-note theme that spells his name: B (B–flat), A, C, H (B–natural)

ORATORIO: A large-scale musical setting of a sacred text, usually a dramatic story from the Old Testament. Handel’s Messiah is the best-known example. Bach wrote three oratorios, for Christmas, Easter, and Ascension. The typical 18th-century oratorio was devotional concert music, but Bach’s oratorios were built around texts taken directly from the Bible and were intended to be played in church on the appropriate feast day, like his Passions. Bach and Handel never met. Bach traveled to Halle with the hope of meeting Handel and invited Handel to visit him in Leipzig, but neither meeting materialized.

By Calvin Stopert and Jennifer Trafton

Bach’s music continues to have an impact 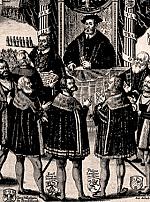