Christ’s passion and ours 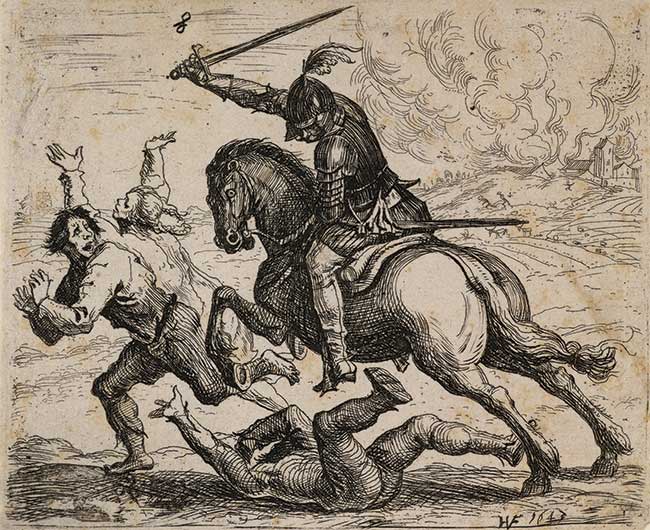 In times of plague or epidemic, Christians have often turned to Christ’s passion to make sense of their suffering. Johann Heermann did so in his hymn “Ah, Holy Jesus,” later popularized through inclusion in Johann Sebastian Bach’s (1685–1750) settings of the Passion story. Martin Luther had built a strong tradition of congregational hymn singing for his followers—characterized, in his hands, by songs like the triumphant “A Mighty Fortress.”

But violent theological controversy in the sixteenth century, the devastation of the Thirty Years’ War (1618–1648), and periodic outbreaks of plague prompted later Lutheran hymn writers like Heermann and Paul Gerhardt to focus more deeply on the believer’s inner spiritual life.

Born in Silesia (in modern Poland), Heermann (1585–1647) was the only surviving child of five and in poor health throughout his life. After an eye infection ended his brief teaching career, in 1611 he became deacon, then pastor of the Lutheran church in Köben near his hometown. The Thirty Years’ War was hard on Köben; the city was burned, plundered, and ravaged by plague over the next several decades. Heermann lost all his possessions more than once and was nearly killed or forced to flee several times. A throat problem brought an end to his preaching, and he retired from the ministry in 1638.

Heermann published three collections of hymns. “Ah, Holy Jesus” was loosely based on a Latin poem then attributed to St. Augustine but now thought to have been the work of medieval monk-theologian Jean de Fécamp. Composer Johann Crüger soon united the hymn to a tune inspired by the Genevan Psalter.

Like many of the popular hymns Bach used in his Passions, Heermann’s lyrics paint a vivid picture of the Crucifixion and make the experience intensely personal. Our modern translation of “Ah, Holy Jesus” omits the fact that Heermann addressed Jesus not objectively as “holy” but personally as “beloved of my heart.” He emphasized how our sinfulness led Jesus to be crucified:

“O great love, O love without any measure, / Which has brought you to this road of torture! / I lived with the world in pleasure and joy, / And you must suffer.”

Unable to think of any act he can offer, he finally exclaimed,

“No human heart can invent anything to give you back in return. . . . How then can I repay / Your deeds of love?” Our most used modern translation’s last stanza leaves us at the foot of the cross, but Heermann actually went a step further to contemplate the resurrected and glorified Christ: “When, O Lord Jesus, there before your throne, / The crown of honor sits upon my head, / Then, when all around rings out beautifully, / I will sing praise and thanks to you.”

Bach used “Ah, Holy Jesus” in both the St. John Passion and the St. Matthew Passion. Stanzas appear when Jesus predicts his Crucifixion, when the soldiers come to arrest him in the garden, and when he proclaims before Pilate that his kingdom is not of this world. We do not know whether Bach knew the details of Heermann’s life. But he shared his faith in the face of tragedy—a faith devoted to Christ who suffered yet was triumphant, who was crucified by human sin yet forgave his betrayers.

Jennifer Woodruff Tait, managing editor of Christian History; adapted from “What language shall I borrow?”in CH #95 (2007)

Lessons from Christian attempts to cope with modern epidemics