“Christ is the master”: Margaret Blaurer

The Protestant Reformation’s destruction of monastic institutions largely closed off the major alternative to marriage for sixteenth-century women (though a few convents limped along for the aristocracy to park surplus daughters in). Reformers put forth married housewives, not celibate ascetics, as the model of female godliness. Margaret Blaurer’s life, though, demonstrates how reform reluctantly made room for female celibate ministry.

Blaurer (c. 1493–1541) came from a wealthy family of linen merchants prominent in the southern German city of Constance and the neighboring Swiss canton of St. Gall since the thirteenth century. Her brothers, Ambrose (1492–1564) and Thomas (1499–1567), sustained the family’s prominence; Ambrose joined a Benedictine monastery, and Thomas became mayor of Constance.

While studying law at the University of Wittenberg, Thomas fell under Luther’s influence and embraced evangelical ideas. He won over Ambrose, who left the monastery to become the leading Protestant pastor in Constance. Margaret, like her brothers, had received a Christian humanist education and knew Erasmus personally. The Blaurers also became friends with Martin Bucer in Strasbourg.

Bucer kept trying to find spouses for friends and colleagues, including Ambrose Blaurer and John Calvin. He enlisted Margaret Blaurer’s help in matchmaking for his young secretary and also sought to marry off Blaurer herself. He first suggested Wolfgang Capito (c. 1478–1541), who he wished to keep out of the clutches of an Anabaptist widow. Later he tried to arrange a marriage between Blaurer and a theologically unstable Italian evangelical refugee 10 years younger, Fontius.

Bucer even suggested that should his wife, Elizabeth, die, he could marry Blaurer. Elizabeth sent a (presumably joking) message to Blaurer warning her that if she came between the two she would be in “a real predicament.” But the reality of sixteenth-century marriage was that bereavement was common, the life of clerical spouses hard, and relatively few respectable women were willing to marry former priests or monks.

That Bucer twice sought to marry Blaurer to people he considered in danger of heresy speaks to his high opinion of her own theological soundness. But Blaurer resisted. At one point Bucer called her “masterless,” but immediately added: “But you say, that where Christ is the master, a person is not masterless.” Bucer had previously insisted on Mary’s wifely submission to Joseph as important for her holiness; acknowledging that a woman might have Christ as direct master showed his respect.

Ambrose assured Bucer that Blaurer was of more use to the church as a single woman. (Eventually Bucer married Capito to Wibrandis Rosenblatt and then married Rosenblatt himself after Capito and Elizabeth Bucer died.) After her mother died, Blaurer managed the household as did Protestant housewives like Katie Luther. But her singleness and her brothers’ backing allowed her to devote herself to Constance’s poor and to establish an organization of women to assist her. She acquired the unofficial label “deaconess of the church,” a biblical term Protestants applied to women engaged in active ministry.

Blaurer’s ministry culminated with the plague outbreak of 1541. Transforming a former convent into a hospital for plague victims, she cared for them personally until she caught plague herself and died at 47. In the sixteenth century, the plague was the acid test of ministry. Clergy who abandoned cities were discredited; those who stayed and ministered were regarded as heroes. In giving her life to plague victims, Blaurer gave ultimate proof that Christ was indeed the only master she needed to carry out a true and godly vocation as a single woman.

Margarethe Prüss helped advance the radical Reformation through her publishing

“God my Lord is even stronger”

Exemplary women of the Reformation with confidence in their convictions 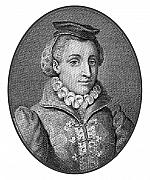 Women of the Reformation: recommended resources

Want to learn more about lesser-known women of the Reformation? Check out these recommendations from our editors and from this issue’s authors.

Von Grumbach’s letter to the University of Ingolstadt protesting the arrest and exile of Arsacius Seehofer for holding Lutheran views, excerpted here, became her most famous and best-selling piece of writing 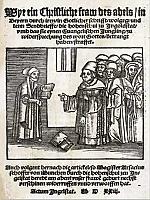