IN OUR FIRST “MONEY” ISSUE OF CHRISTIAN HISTORY (Vol. VI, Number 2, 1987), we asked readers for feedback. And we got it. We received many kind words, some strong criticism, and a number of very good suggestions that helped shape this second issue on money. As expected the “Modern Voices” article drew the most criticism. In it, we attempted to survey eight substantially different positions on money currently held by Christians. It was a motley collection—simple living, missions, liberation theology, theonomy, health & wealth, neo-conservatives, U.S. bishops, and Jacques Ellul. Being a survey article, it had to generalize considerably, the writer made free use of labels—this bothered some readers.

One theonomist objected to several points, including our statement that theonomy wants to keep money out of the hands of non-Christians because they, being unregenerate, don't know how to use it properly. He writes, “Christians should not try to keep money out of anyone‘s hands; they should gather wealth by hard work and obedience to God‘s standards in His law, and they should use this wealth responsibly as God directs for His glory and the good of all men.” He also disputed our statement that theonomists “ dismiss the distinctions made by most evangelicals between ceremonial, civil, and moral law” in the Old Testament. Theonomists do make such distinctions, the writer asserts, although they draw the lines in different places than many evangelicals have traditionally drawn them.

Another writer had problems with our treatment of Health & Wealth teaching. We had said that such teachers interpret Mark 10:29, 30 to mean that Christians will receive a hundredfold return in this life of whatever they give. The writer assured us that Dr. Kenneth Hagin and Rev. Kenneth Hagin, Jr., whose ministry he supports, do not hold such a view. He also says that we misconstrued the Hagins’ teaching on suffering. Interested readers should do their own research on the subject. We recommend Bruce Barron‘s excellent and seemingly balanced book, The Health and Wealth Gospel (InterVarsity, 1986). In the Questionnaire, we asked readers which of the modern views they most agreed with, and which would be at the bottom of the list. For what it‘s worth, the Health & Wealth position (at least as we presented it) hit bottom with greatest frequency. The top spot was shared by several. One wrote, “Simple living is closest. I try to live simply, but do not always succeed.” Several seemed unfamiliar with Jacques Ellul, but intrigued by his thinking.

“All of your Modern Voices represent various degrees of compromise between God and Money (Mammon),” writes another reader. “Only Jacques Ellul faces the issue squarely, but gives no practical answers. He says, ‘Do not love money. Give it away.’ But how is one going to live?” Respondents were divided on the question of tithing.

Some consider it the biblical standard of giving; others call it the Old Testament standard, irrelevant to New Testament Christians. A New York reader says, “In practice we should give ten percent of our gross to the church and organizations doing His work or directly to the needy, or a combination of the three. Then, to the best of our ability, we should practice abundant sharing above and beyond the ten percent.“

A member of the Hutterian Brethren, who believe in the communal sharing of wealth, writes, “The fact that ‘Money in Church History’ raises so much interest, controversy, and conflicting views shows in itself how deep, urgent, and fundamental this whole question is to the life of a Christian. Legalized, idealistic, or superimposed sharing is disaster; it must come from the deepest heart as the impulse to love.... ” A reader from Pineville, Louisiana wonders why schools that train people for ministry don't include some mandatory training in money management. With all the questions and difficulties Christians have concerning money, church leaders must be able to practice and teach sound principles. From Kansas, a reader writes, “ The Word of God does present money in different ways, but it is all a matter of the heart.... Do we worship money or do we use it to the glory of God who gave it and worship him for giving it to us to use? Often money becomes a curse.“

A New Yorker comments, “ We agree with Minucius Felix‘s statement that a man is poor who possesses much but still craves for more. We also agree with professor White‘s statement that God wants us to use wealth wisely, not to abandon it. We have always admired the asceticism of St. Francis, but we did not realize how unbiblical he was until we read the Money Issue. For example, his statement that by begging, ‘merits would be heaped up for him.’ We are saved by grace and not by works.“

A woman from Philadelphia adds, “I think it‘s a tragedy that society judges success by your earnings rather than accomplishments. People are rewarded by more and more raises. I feel happiest with the idea of work as a calling. Work for me is not a punishment for sin . . . it is a blessing to love my work. How many people do not!“

“ My thinking is more in line with Clement‘s in his sermon on the rich young ruler,” says a woman from Tucson. “ The key words in the parable, I think, are ‘follow me,’ and this is the bottom line both individually and corporately for the Christian monetary outlook.“ 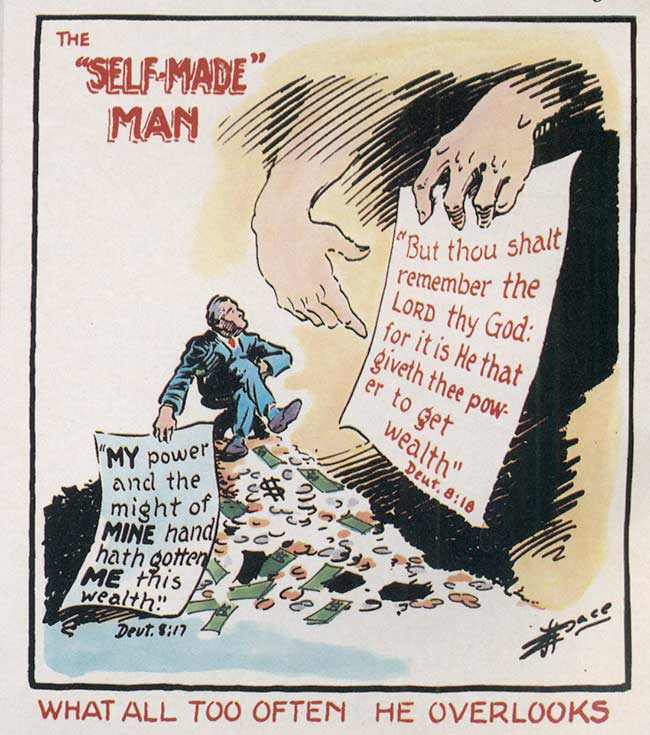 There is no one more unattractive than a person addicted to stinginess, nor, truly, more pitiful. It is also my opinion that monuments to individuals who acquire money through "ill-gotten gains" are a violation—a trampling upon—of our basic Christian concepts, regardless of claims to philanthropy. Nor do the ends justify the means in the acceptance by the church of such gains.

As for the subject of indulgences, I throw up my hands in dismay! The exploitation of the ignorance of the laity [was] deplorable and a usurpation of the Lord's sacrifice.... The only modern version that might be comparable is the "Health and Wealth" gospel.

I don't support any TV ministry. I am not a regular viewer. I don't consider any investment a good one for which I do not receive an accounting-and TV ministries don't seem to have a very good accounting reputation. The constant need of money distracts from the message and consumes too much time.

We have used your recent issue concerning the Christian response to money as a Bible study program for our adult Sunday morning class this fall. The response was quite favorable....

In brief, the response of the class members included gratitude that the editors reflected different Christian responses to economic wealth down through the centuries, presenting each as an honest Christian response. The study was good for [one] person in that it gave her a position from which to address the issue within her own family, without appearing or feeling manipulative.

Most participants had not given much in depth thought to Christianity and money as a theological issue. We are a small, struggling congregation. We know we have to contribute to keep both the pastor&rsquo;s family and the church furnace alive, and we also are concerned about church missions, both here in Alaska and in the world. Sometimes we are unable, as a church, to meet our obligations at a level that is satisfactory to us.

It is from this perspective that we look at the &ldquo;electronic church,&rdquo; and wonder if the monies collected by these institutions could not be used to much better advantage by local church congregations for meeting the specific physical and spiritual needs of individual persons in their communities. Jesus worked one-on-one.

He touched people. It is sad that so many of our older persons today experience the &ldquo;presence of Jesus&rdquo; in a lonely room, with little to eat, in front of a television set. How much better it would be to experience the love of Jesus through the visit of a Christian minister or friend with a pot of soup and a couple of sandwiches. How much better to watch a television show with both Jesus and an earthly friend....

Your “Money in Christian History” issue has provoked a lively twelve week discussion in our Bible study group. We are a Career-Couples class in the Sunday school of Ginter Park Baptist Church, Richmond, Virginia; 12–15 adults, most of us in various family, business, and/ or professional pursuits.

Our discussions worked from a brief syllabus drawn up around the Bible passages suggested in the Reflection and Study Guide on page 36. Along with each passage, we have looked at one piece of writing in the magazine and usually a section or phrase from our church covenant....

These general observations: 1. No discussion sticks with “just money”; we always get to some value-based issue or lifestyle concern. 2. St. Francis keeps coming up in our conversations but his individualistic extreme seems less relevant to fiscal or social responsibility in our day than, say, the readings from Clement, Thomas Aquinas, and Martin Luther....

The value of the issue is that, while we have studied what the Bible says, what Christian activists and thinkers have said and done, we ourselves have had to try to respond. We have been challenged to ponder our own relationships to money in a society facing a new century at a time of rapid and global change. Our thanks for providing us a stimulating magazine issue which encouraged serious dialogue in our group.

By the editors and readers

The Cost of Discipleship