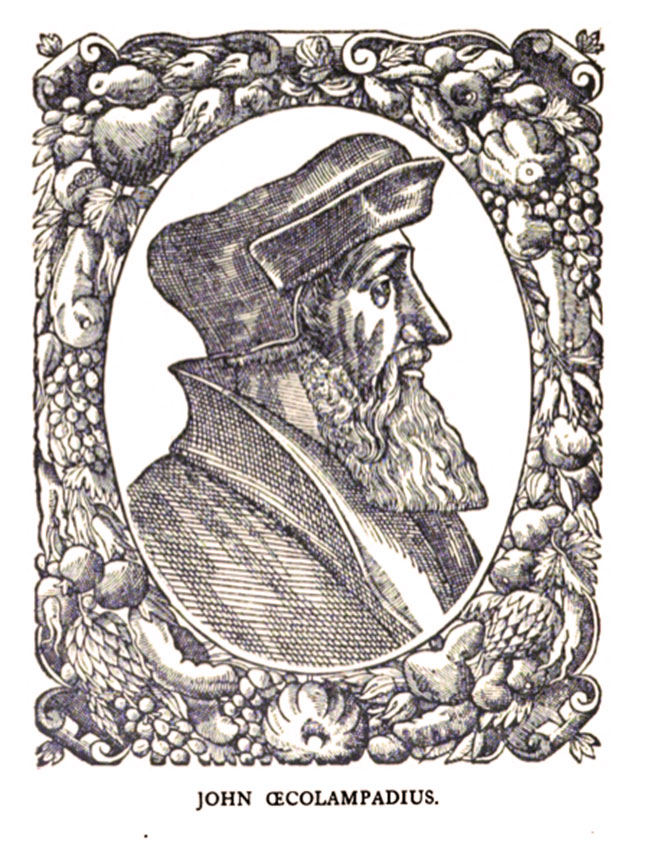 [Oecolampadius from an engraving in Beza's book of contemporaries]

Oecolampadius (Greek for "house lamp") studied with the ground-breaking linguists of the day—Reuchlin and Erasmus. His knowledge of Greek enabled him to translate books for the voracious presses of the day. After the Reformation got rolling, he sided with the reformers, becoming an admirer of Ulrich Zwingli. A peaceable man, Oecolampadius tolerated differences in Protestant beliefs about the Lord's Supper and rebuked harshness in any guise. His key innovation was to encourage the reformers to allow laypeople more say in the affairs of their local churches, an idea picked up by Calvin and Knox. And as one who had helped Erasmus prepare his Greek New Testament for publication, it is not surprising that Oecolampadius had a high regard for Scripture. —Dan Graves

Ernst Staehelin’s Das Theologische Lebenswerk Johannes Oecolampadiusremains the most thorough treatment of Oecolampadius’ theology in spite of the fact that it was published in 1939. Oecolampadius’ understanding of Scripture was developed as early as 1522. He observes "Das verbum Dei ist identisch mit der evangelica doctrina. Diese, das ewangelium und die ware haylge geschrift ist die einzige Norm." This viewpoint [i.e., that the Word of God is identical to the evangelical doctrine and that for the true gospel Scripture must be the norm] lines up perfectly with the views of both Zwingli and Bullinger. But the viewpoint of Oecolampadius goes a step further than Zwingli and Bullinger, at least in terms of his explication of that viewpoint, as has been shown by Jeff Fisher’s particularly helpful study of Oecolampadius’ interpretation of the Letter to the Hebrews.

Oecolampadius’ viewpoint, then, was more nuanced, and in many ways more Christocentric (or as Fisher expresses it, Christoscopic) than his co-reformers in Switzerland.

Diane Poythress’s overview of Oecolampadius’s life and thought offers Oecolampadius’s understanding of the clarity of Scripture from an excerpt of his commentary on Isaiah:

The sense of Scripture is opened to none except those who seek Christ, and to whom Christ reveals himself. For He has the key of David, He closes and no one opens, He opens and no one closes, Revelation. Indeed also, if you say that the Holy Spirit is the door-keeper, He opens to no one except the one who enters through the door which is Christ.

Oecolampadius’s understanding, according to Poythress by means of her selection of a quotation of Oecolampadius, of the clarity of Scripture is that Scripture is clear only to the follower of Jesus. Others, lacking access to the inner light of the Spirit, cannot see the Bible illuminated and truly.