When I was 14 years old, my grandfather died. I remember my mother and my grandmother, as they commiserated in their grief, sharing a little book between them; C. S. Lewis’s famous A Grief Observed, published in 1961 after the death of his beloved wife Joy Davidman. Those who have been through a great grief often are best ministered to by others who have faced the same tragedy, both feeling God’s absence and tracing his gracious hand.

I thought of how Lewis addressed his grief by writing it down and sharing it with the rest of us when a much more recent book came to my attention - though in fact it presents to us a much older grief. Ron Rittgers’ A Widower's Lament: The Pious Meditations of Johann Christoph Oelhafen introduces, translates, and edits a remarkable document - you could almost call it the Grief Observed of the early 17th century. 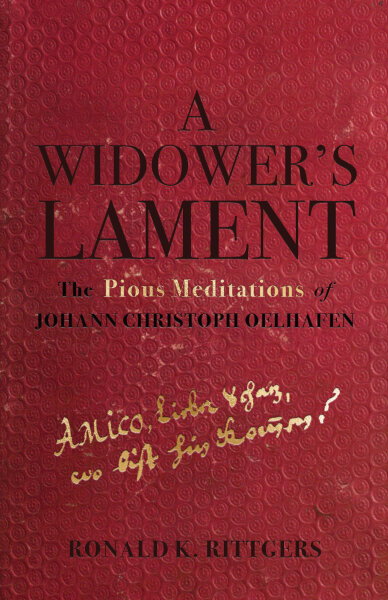 Johann Oelhafen (1574-1631) was a jurist and legal advisor in Nürnberg, and a devout Lutheran. He spent nearly two decades married to his beloved Anna Maria Harsdӧrffer (1582-1619), from 1601 until her death. They had eight children (of her 13 pregnancies, five children died prematurely or when they were very young). She never recovered well from the birth of their last child in late 1618, and died on February 13, 1619. That very same day, Oelhafen began a journal.

For nearly a year, until January 1, 1620, Oelhafen prayed and grieved through writing. He wrote prayers and hymns. He recorded his worries and prayed for safety in his frequent journeys. He borrowed devotional material from others and wove it into his reflections. He cried out in lament and recorded feelings of praise and peace. Though he does not seem to have written with broader publication in mind, he certainly shared parts of this ongoing journal with his children as they grieved the loss of their mother.

On February 21, 1620, Oelhafen remarried to the twice-widowed Catharina Pfinzing (1585-1637) - such frequent marriages after the deaths of other spouses were, as Rittgers notes, “the norm in early modern Europe,” full as it was of plague and war and other dangers. (For a similar story, read about Wibrandis Rosenblatt from CH #84). Johann needed someone to raise his eight children, and Catharina was a family friend who had already been godmother to Johann and Anna Maria’s last surviving child and visited both of them during illnesses. We have no record of what their marriage was like, Rittgers records, other than that they had at least one child together and that Oelhafen’s career prospered. When Johann died he was laid in Anna Maria’s tomb, and Catharina was buried there as well when she died six years later.

Rittgers makes an excellent scholarly case for the things we learn about early Lutheran attitudes towards suffering, lament, vocation, and pious practices from Oelhafen’s work. But the Pious Mediations is equally impressive as a work of devotion to spark our own prayers. You might consider reading one entry a day and meditating on it. As was true of Lewis's book, those who have been through a great grief often are best ministered to by others who have faced the same tragedy, both feeling God’s absence and tracing his gracious hand.