John Scotus Eriugena and the unknowability of God

The life of controversial medieval philosopher, John the Irish Gael. A guest post from about-history.com 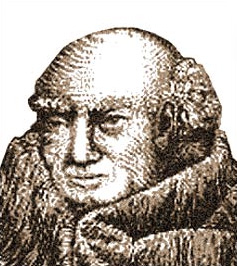 These words were written, in their original Latin, roughly 1100 years ago by a philosopher, scholar, poet and teacher—a man now regarded as one of the last ancient philosophers and a bridge to modern philosophy.

From this quote alone, it would be hard to tell that John Scotus Eriugena was a Christian. Indeed, while his Christian beliefs are fundamental to his philosophy, there is a striking element of profundity and logic to his works that speaks of the universality of God and of experience. Eriugena is often described as a Neoplatonist: someone influenced by the Greek philosopher Plotinus who takes those arguments to new conclusions. He knew Greek from his time studying in Athens and from his Irish education, a rarity in medieval Europe, and therefore had exposure to philosophies that were not available to many of his contemporaries.

Clearly, he was a controversial figure in his time, famously having (possibly) been stabbed to death by his students with their styli, or pens—whether this means they denounced and condemned him in writing or that they literally stabbed the life out of him remains unclear. It is even possible that the stabbing happened to a different John. Given how close the radical philosophies of Eriugena come to pantheism and a rejection of the "Christian" conception of God, it is not hard to believe that he was murdered by folk who were intimidated by his almost heretical vision. It's probably not even true, though it is a good story. His philosophies are still rejected by many modern Christians who do not agree with the interpretation of God, Genesis, and the nature of creation that Eriugena so radically put forward so long ago.

Not much is known about the life of John Scotus Eriugena, or "John the Irish Gael", as the literal translation allows. He was almost certainly Irish, hence the name, and was likely educated there. In about 845 he moved to France on the invitation of King Charles the Bald, taking up residence at the Palace School. Here he succeeded Alcuin of York as head of the school, increasing the reputation of the school and himself significantly during his tenure. One version of his later life has him travelling to Oxford on the invitation of Alfred the Great, where he became abbot of Malmesbury and suffered the aforementioned inky death at the hands of his students. Another, more likely, story is that he stayed in France for at least 30 years until his death.

Disappointingly for scholars, the early works of Eriugena do not survive; we know that he wrote a treatise on the Eucharist which is lost to history. This is possibly due to its apparent argument that the Eucharist was only figurative and shouldn't be taken literally. Later scholars who put forward this view were condemned (one philosopher, Berenger of Tours, was, as the story goes, made to burn the work in penance) and it is likely that a text that so challenged the traditions of the church was simply censured.

His later works were widely read and copied; we know they were used in debates and discussions between high-ranking members of the church. This is perhaps surprising, given how boldly confrontational his views were: that philosophy and religion are one and the same, that God is reflected in every being, including animals (whether animals had souls was a matter of intense debate), and that the reality of God was unknowable, even to Himself because God is everything and nothing at all.

God, to Eriugena, was understood as transcendent, infinite, and ultimately unknown and unknowable.  Eriugena argued that this infinite God manifested himself in creation, bringing the Word (Christ) and all creation from timelessness into time. All of reality, Eriugena said, was undergoing exitus and reditus,the outflow and return to a singular "One". This is the highest principle, according to Eriugena, transcending everything, including being. Even when things appear to be divided, they retain a common and universal nature. This was the core of his work De divisione naturae, or On the Division of Nature—entertainingly denounced as "swarming with worms of heretical perversity" hundreds of years later by Pope Gregory XIII.

About History is an educational website that covers each aspect of human history. Find out more at

You can learn more about the anonymous monk who influenced Eriugena's views on "unknowing" God here, found in our latest issue of Christian History, #127: Medieval lay mystics. For more about John Scotus Eriugena, check out this article about him in Christian History issue #108: Charlemagne.