The excerpts of Zwingli’s exposition of the Prophet Jeremiah below give readers first hand a sense of the method of Zwingli’s exegesis and his exegetical process-- along with the genuinely engaging and insightful observations he makes about Jeremiah. 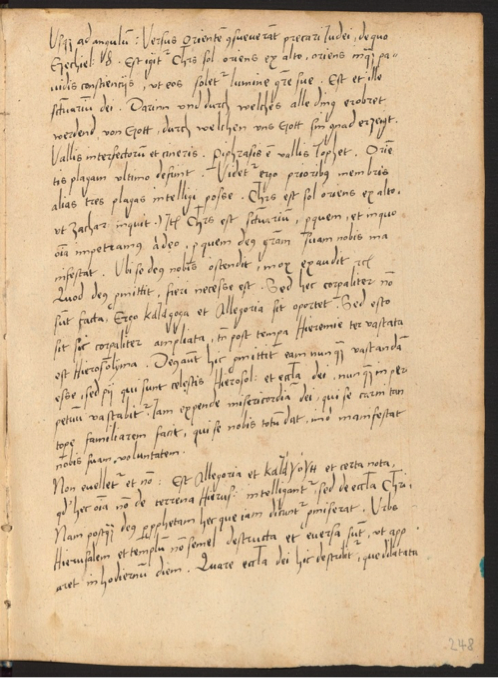 Courtesy of the Zurich Central Library

"If God had said, 'I must have a prophet,' Jeremiah would have said, 'I can not do it,' etc. For all of God's words came before: 'I already know you; I know who you are ... 'What he knows, he has to arrange; all of those are related to it. He can do it. Can do it and wants to do it.

"God is a faithful steward; he gets up early enough, which means he warns often enough."

"Behold, I seek a home with them." This is a Hebrew phrase, "to seek" for "punish." Although I have warned and waited a long time for improvement, the year of punishment comes after all, as we say: The hour is here, or: the hour is coming."

"If God is in the heart of man, divine works will come out of it, like heat from the furnace when there is fire in it. As the [renowned] speakers say: Where trade is a heartfelt concern, it is spoken of bravely; where not, everything is pulverized and powerless.” This is a relatively unclear sentence. It must have made sense to Zwingli’s audience but it is rather uncertain for us.)

"Thopheth will be your grave." Milan is your grave (Marignano)."This is a remarkable statement given the fact that in 1515 Zwingli served as Chaplain to the Swiss troops at the disastrous Battle of Marignano. This author argues elsewhere that Marignano was the turning point in Zwingli’s theological development and the moment in life when he began to question the entire foundation of Catholic doctrine and practice.

"The prophetic office is difficult and dangerous, because the prophet is not only to preach in the temple, but also in the courts of the princes and kings, where the way of life is thoroughly ruined; there the highest aims are power, greed, luxury, pleasure and tyranny."

"When one hears the word of God, there is still hope to be had; where not, but one comes to the point that one no longer wants to listen to the same, there it is a sure sign that God will punish this people. Sinfulness has its own measure and purpose…”

"Bondage arises from wickedness, disobedience, wastefulness, rudeness, and this by order of Divine Providence.”

Courtesy of the Zurich Central Library

Huldrych Zwingli was not simply the originator of the Reformation in Switzerland.  He was not merely the foe of Luther at the Colloquy of Marburg.  He was not simply the enemy of the Mass and the abuses of the Church.  He was an extraordinary exegete and interpreter of the biblical text.  He was a masterful translator and a gifted biblical scholar.  He should, rightly, be remembered as such and honored as such.  In the small sampling above we have seen just a fragment of Zwingli’s exegetical work. The volumes of the critical edition of Zwingli’s writings which contain his exegetical work are extensive and even they do not contain all of Zwingli’s exegetical writings.  Zwingli, it is fair to say, was the greatest of the Reformers when it comes to the practice of biblical exegesis.

Not only did he practice excellence in exegesis, he was utterly instrumental in the establishment of the first Reformed institute of higher education, the Prophezei.  That gathering of clerics and townsfolk that assembled every weekday but market day for the reading and exposition of Scripture was the foundation upon which the later University of Zurich was built.

The legacy of Zwingli extends far beyond the Canton of Zurich, reaching across time and sea and manifesting itself to this very day in the beliefs and practices of millions of Christian people who follow his teachings about the Lord’s Supper and Christian exegesis, even if those millions have never heard his name.

Read more of the Reformation's reverberations, thanks to Zwingli among others, in Christian History #118: The People's Reformation.