I Still Don’t Know How He Does It

IN 1944 British writer Dorothy Sayers (1893-1957), already famous as the author of Lord Peter Wimsey detective novels, holed up in an air raid shelter with Dante’s Divine Comedy. She finished Inferno in Italian—in five days, then wrote the following letter to Charles Williams. She knew Williams through C. S. Lewis’s “Inklings” group and through Williams’s book on Dante, The Figure of Beatrice. Sayers’s fascination with Dante resulted in an ambitious translation of the Comedy (used throughout this issue) and numerous essays and lectures.

You say you like getting letters, so I am writing you one to say that I have embarked upon an arduous enterprise for which you are entirely responsible.

Having read The Figure of Beatrice, and coped with “Lewis on Milton” [A Preface to Paradise Lost] and actually re-read the greater part of Paradise Lost in consequence, I cheerfully remarked to a friend that Milton was a thunderingly great writer of religious epic, provided it did not occur to you to compare him with Dante.

My friend, with mild countenance and disarming honesty, replied that she had never read Dante. I then became aware that I had never read Dante either, but only quoted bits of him and looked at Doré’s illustrations to the Inferno (and I still think, whatever it may be the fashion to say about Doré, that he was a great illustrator). It then came to my mind that perhaps I had better read Dante, or else I might find myself condemned to toddle round for ever among the Hypocrites.

And why, you naturally inquire, had I never read Dante? Well, to begin with, I don’t know any Italian.... In that case, why not read a translation? The trouble is that I know just enough Latin and French and Old French to make medieval Italian look easily readable, and that in the Temple Classics edition of the Commedia which I possess, the English and Italian are printed side by side, so that I cannot read the translation without letting my eyes stray to the lovely tooral-ooral on the opposite page....

My Dante is in three volumes; it belonged to my Mother or was it my Grandmother? at any rate, I inherited it. And at once I observed a sinister thing about it: the Inferno is slightly loose at the joints; the Purgatorio in excellent condition; the Paradiso practically “as new.” I remembered with some alarm that you had said unkind things about people who disgustingly preferred the Inferno to the rest. Was I to suppose that my Mother and my highly religious Grandmother had been tempted, like Dante, to brood gloatingly over the circles of Malebolge to the point where Virgil lost patience with them?

With your reproofs in mind, I nearly resolved to take Hell as read and begin with volume 2. But a voice (very likely that of the Tempter) said to me: “In order to do justice to a work of such vast scope and dignity, it is necessary to begin in a proper manner at the beginning (with the intention, of course, of going on to the end and there stopping). I conclude that many of the people who “prefer” the Inferno are obliged to express this preference in order to conceal that fact that, having got so far, they have gone no further.

Be that as it may, to this point have I now come, having, by slipping and scrambling between the original and the crib, and spelling out the Italian, as one who with two fingers executes a complicated passage of music upon the pianoforte, traveled in five days through the Centre to the Antipodes [i.e. read the entire Inferno]. ...

First of all, the thing that really surprises me is that Dante could contrive to make the story so exciting. I still don’t know how he does it. After all, even without having read it, one knows what it’s all about, and you wouldn’t think there could be any real suspense about it except a mild speculation as to whether the next clutch of bad eggs is going to be served up poached, fried or scrambled. In spite of which I found myself panting along with my tongue hanging out, as though it were a serial thriller, careful not to read the argument of each canto beforehand, lest it should spoil what was coming.

Why? I don’t know any of the dreary popes and political nuisances whom Dante encountered down there—I can imagine that it must have been a terrific succs de scandale for his contemporaries, but why should I get excited about it?

The whole affair is extremely monotonous—and as you point out, meant to be an unrelieved monotony of grimth—everybody, except Francesca and Ugolino, has much the same remarks to make, and there is not much to choose between a bath of boiling blood and a bath of boiling mud; and still the thing is exciting. To anybody who can write 34 cantos of about 140 lines apiece on a subject like that and keep you worked up all the time I take off 34 hats one after the other.

Yes, of course, in a way I know how it’s done. I could take it to pieces and analyze the tricks. Just when you are getting tired, some “invention” occurs—an alarming hold-up at the gates of the infernal city, a pathetic story by Francesca or Ugolino, a pleasant aerial excursion on Geryon’s back, a grisly laugh over the quarreling demons, and a picturesque apparition of giants, a sudden dab of bright color when Disappears in the middle of the gray ice, a smattering of science when they pass the Centre and come out upside-down but merely naming the tricks doesn’t explain the achievement; it only makes one think one’s self clever.

Reprinted by permission of the estate of Dorothy Sayers and the Watkins/Loomis Agency.

Reformation on the Run

Those who believe that God rewards righteous nations have Orosius to admire and Augustine to dispute.

A life of fabulous privilege lost its grip on Thomas.

It spread faster than any other religion in history. Here are some reasons why. 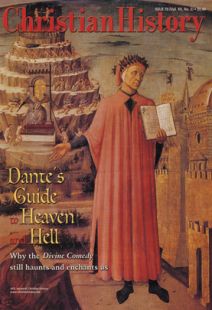