Using torture to interrogate suspected terrorists. Intervening in other countries to stop genocide. Resolving ancient disputes and modern violence in the Middle East. Blowing the whistle on corporate crime. Restraining a rogue state. Confronting the crack dealers across town—or down the street.

Dietrich Bonhoeffer has become the patron saint of hard cases, a guide to the ethically perplexed, an inspiration in a dilemma, a beacon in moral murk. His participation in a conspiracy to murder Hitler and his subsequent imprisonment and execution when the plot failed has become the defining moment of his short life. Bonhoeffer has much to offer us as we consider the terrible challenges of contemporary life. But he also offers us deep wisdom for living in the everyday as well.

Bonhoeffer was born into a genteel German middle-class family with a distinguished and even noble heritage on both sides. His father, Karl, was a psychiatrist and professor at the University of Berlin, and his family enjoyed a large home, servants, and all of the security and pleasure of the establishment— even during the difficult years for Germany following World War I.

Young Dietrich was an intellectual prodigy who astounded his lightly religious family by devoting his talents to theology—earning his Ph.D. at Berlin in 1927 and then his Habilitation (a sort of “crowning degree” that came with an invitation to teach) in 1930. He was also ordained in the state Lutheran church and spent short stints in pastorates in Barcelona and London as well as Germany.

He visited America twice, with Union Theological Seminary in New York City as his home base. Appalled by the Americans' lack of theoretical theological interest, he became impressed by their practical concern—notably that of Reinhold Niebuhr. He also was deeply moved by African-American Christianity, and he often visited black churches in nearby Harlem, notably the grand Abyssinian Baptist Church. These experiences combined to press the academic Bonhoeffer further into pastoral and practical modes.

Back in Germany, as the Nazis came to power in the early 1930s and advanced their program of nationalism, revenge, and racism, Bonhoeffer responded in three ways.

Locally, he left the prestige of the university to head up a small, illegal seminary in the country to train pastors for the Confessing Church, a fellowship of Christians who believed that the primitive confession “Jesus is Lord” must be maintained against the cult of Hitler as Leader. During and shortly after this brief, intense two-year stint, Bonhoeffer wrote his two most popular guides to Christian living, The Cost of Discipleship and Life Together.

The ultimate question for a responsible man to ask is not how he is to extricate himself heroically from the affair, but how the coming generation is to live.

Nationally, he participated in public and private debates about the relationship of the Nazi Party and the church, thus placing himself under the watch of the Gestapo. He successively lost the right to teach, preach, and publish.

Internationally, he used his extensive contacts in the ecumenical movement both to encourage the Western church to speak out against Nazism and to encourage other governments to put diplomatic pressure on the Nazis to ameliorate their programs. He became a formidable proponent of nonviolence at this time, and even made plans to travel to India to study the political philosophy of Mohandas Gandhi.

Bonhoeffer was related to several Jews and had a brother-in-law positioned in Army Intelligence (the Abwehr), so he knew better than most what the Nazis were doing in their anti-Semitic crusade. As war broke out and the Nazis intensified their racism and imperialism, Bonhoeffer agreed to join a conspiracy within the Abwehr to overthrow Hitler. He was hired by the Abwehr both to protect him from the Gestapo and to give him the opportunity to serve as a double agent. Ostensibly visiting his international contacts in ecumenical church work, he was supposed to be spying on other countries. But in fact, he acquainted friends elsewhere with the German Resistance and sought assurances that, should their plans succeed, the Allies would not capitalize on Germany's disarray to visit upon her even more grief.

When this duplicitous diplomacy came to nought, however (the British government in particular promised nothing to the German Resistance), Bonhoeffer came to despair of a nonviolent solution. The German armed forces went from success to success, Hitler's grip on his own nation seemed absolute, and the roundup of political and racial undesirables was increasing.

The conspiracy transitioned then from a nonviolent coup d'état to an assassination plot. Several attempts were made on Hitler's life, and all failed. When the last one injured but did not kill him, Hitler vowed to execute everyone involved. Bonhoeffer's brother-in-law in the Abwehr, Hans von Dohnanyi, was arrested, and in his desk were names of co-conspirators, including Bonhoeffer. In April 1943 Bonhoeffer was arrested in Berlin, never to emerge again from Nazi custody.

During his two years in prison, Bonhoeffer simultaneously engaged in three acts—paradoxical, at least, if not contradictory. First, he continued to work on what he viewed as his magnum opus, the Ethics. This volume—never completed and later published in fragmentary form—set out themes for living as a Christian in the world, and did so with tremendous subtlety and creativity. He also wrote letters and other works, published later, which contained ideas and phrases that would inspire and intrigue many.

Second, he counseled his fellow inmates and even some guards, offering them hope and often negotiating better treatment for the prisoners.

Third, however, while he was producing this deeply important Christian theology and ministering as a pastor, he was also lying to the Gestapo, trying to protect what was left of the conspiracy and those already arrested. And his writings show that he had moved from the clear simplicity of his earlier views to a complex understanding of discipleship that took into account both peace and war, good government and bad, normal life and what later ethicists would call “boundary” or “borderline” situations of extreme moral challenge that offered no obviously “pure” choice.

Bonhoeffer felt let down by his church. The theology he had so assiduously learned in university did not prepare him to confront the diabolical programs of the Nazis, nor to condone the collaboration of both Catholic and Protestant hierarchies. Where was Jesus leading his disciples in this valley of the shadow of death? Surely not merely to self-defense. Not even merely to the freedom to preach the gospel.

What mattered instead was service to others, and particularly to the victims. What mattered—and here was Bonhoeffer at his most radical—was not one's own security and easy conscience, but the world one would leave behind for those who would follow: “The ultimate question for a responsible man to ask is not how he is to extricate himself heroically from the affair, but how the coming generation is to live.”

The true cost of discipleship

Bonhoeffer loved ordinary life. He was a talented pianist in a musical family and well known for his delight in the outdoors. He fell in love and got engaged—although he would be executed before he could be married. His writings, particularly the Ethics, exhort us to enjoy “the natural” as God's good provision for us:

The homes of men are not, like the shelters of animals, merely the means of protection against bad weather and the night or merely places for rearing the young; they are places in which a man may relish the joys of his personal life in the intimacy and security of his family and of his property. Eating and drinking do not merely serve the purpose of keeping the body in good health, but they afford natural joy in bodily living. Clothing is not intended merely as a mean covering for the body, but also as an adornment of the body. Recreation is not designed solely to increase working efficiency, but it provides the body with its due measure of repose and enjoyment. Play is by its nature remote from all subordination to purpose, and it thus demonstrates most clearly that the life of the body is an end in itself. Sex is not only the means of reproduction, but, independently of this defined purpose, it brings with it its own joy, in married life, in the love of two human beings for one another.

When things become extraordinary and unnatural, however, Bonhoeffer also saw clearly that our only choice is to do the best we can, to be as faithful to Jesus as we can. And that means not to sort out our actions on a neat ethical grid of right and wrong, but to strive to accomplish as much good as possible:

Responsible action does not lay claim to knowledge of its own ultimate righteousness. When the deed is performed with a responsible weighing up of all the personal and objective circumstances and in the awareness that God has become man and that it is God who has become man, then this deed is delivered up solely to God at the moment of its performance. ultimate ignorance of one's own good and evil, and with it a complete reliance upon grace, is an essential property of responsible historical action. The man who acts ideologically sees himself justified in his idea; the responsible man commits his action into the hands of God and lives by God's grace and favour.

If getting God's will done in the world means one must engage in conspiracy, deceit, and assassination, then Bonhoeffer was prepared to incur whatever guilt those evil actions entailed. Indeed, he did not want to call evil good, and thus he speaks of guilt that one would obtain if these actions were undertaken.

Thus the theologian who railed against “cheap grace” in The Cost of Discipleship later cast himself on the “costly grace” of God and—in extremis—did the bad thing that good might come. He had been a pacifist, and always wanted to remain one. Violence was only a last resort, and a darkly strange one for the Christian. But Bonhoeffer recognized that God himself had used violence on others, as well as on himself, to accomplish good that could be realized no other way. We must not, Bonhoeffer concluded, strive to be more “holy” than God.

And Dietrich Bonhoeffer challenges us still to shoulder our crosses and follow the Lord of All also through the places of ambiguity, violence, and costly grace on our way home.

John Stackhouse is the Sangwoo Youtong Chee Professor of Theology and Culture at Regent College, Vancouver, Canada. He is currently writing a theology of culture largely shaped by Bonhoeffer's theology. 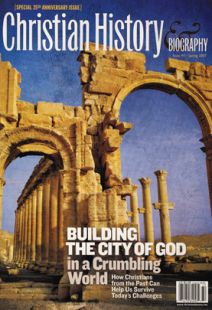