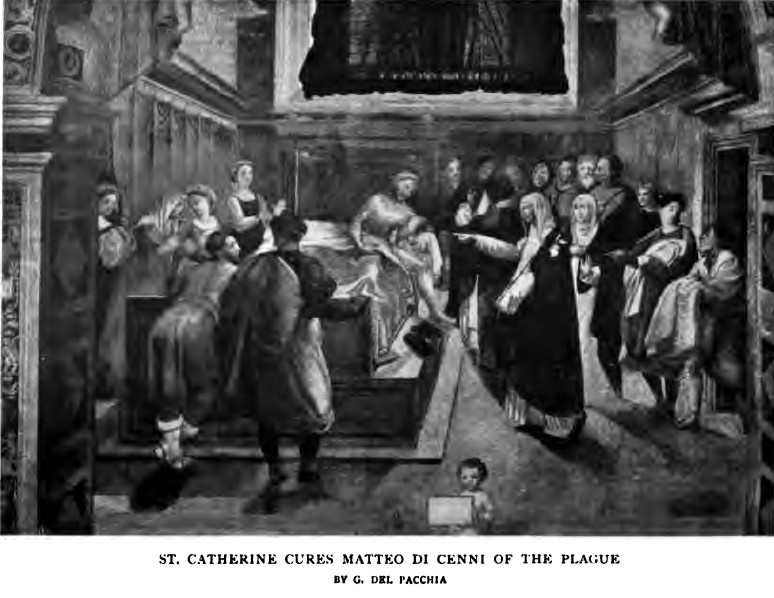 CATHERINE OF SIENA was born in 1347. That year, according to writer Charles L. Mee, Jr., “in all likelihood, a flea riding on the hide of a black rat entered the Italian port of Messina. ... The flea had a gut full of the bacillus Yersinia pestis.” With that rat, flea, and bacillus, came the most feared plague on record. In just three years, 1348 to 1350, the Black Death killed more than one-third of the entire population between Iceland and India. Remarkably, the young Catherine survived the onslaught.

Symptoms of the Black Death

What was this plague like, this unseen killer which so changed the fourteenth-century world?

“The first symptoms of bubonic plague often appear within several days,” writes Mee in Smithsonian(February 1990). They include “headache and a general feeling of weakness, followed by aches and chills in the upper leg and groin, a white coating on the tongue, rapid pulse, slurred speech confusion, fatigue, apathy, and a staggering gait. A blackish pustule usually will form at the point of the flea bite. By the third day, the lymph nodes begin to swell ... The heart begins to flutter rapidly as it tries to pump blood through swollen, suffocating tissues. Subcutaneous hemorrhaging occurs, causing purplish blotches on the skin. The victim’s nervous system begins to collapse, causing dreadul pain and bizarre neurological disorders. ... By the fourth or fifth day, wild anxiety and terror overtake the sufferer—and then a sense of resignation, as the skin blackens and the rictus of death settles on the body.”

“It is hard to grasp the strain that the plague put on the physical and spiritual fabric of society,” Mee concludes. “People went to bed perfectly healthy and were found dead in the morning. Priests and doctors who came to minister to the sick, so the wild stories ran, would contract the plague with a single touch and die sooner than the person they had come to help.”

People barred themselves in their houses or fled to the country. A fourteenth-century writer, Jean le Bel, wrote that “one caught it from another, which is why few people dared to help or visit the sick.”

Yet when another wave of the plague struck Catherine’s hometown of Siena in 1374, she determined to stay. Following the example of the early Franciscans and Dominicans, she and her followers stayed to nurse the ill and bury the dead. Respected nineteenth-century historian Philip Schaff wrote that during the plague Catherine “was indefatigable by day and night, healed those of whom the physicians despaired, and she even raised the dead.”

Such courageous service was nothing new to Catherine. When she began her ministry, writes Caroline Marshall, “she performed the most distressing nursing chores among those incurably ill of cancer and leprosy. Her patients were in pain and often abusive. She believed that these experiences helped her to share in the suffering of the crucified Christ and were, therefore, a great help along her path to the mystical union with God, which was her ultimate goal.”

The Hymn Born in a Synagogue

How a Hebrew text and synagogue melody became a well-known Christian hymn.

The Empire Within the Empire

Nat Turner’s rebellion, the bloodiest in slave history, was driven by his prophetic visions.

The high school physics-teacher-turned-novelist whose writings shook an empire.