It is easy in retrospect to demonize the industrial revolution. Thanks to 19th-century writers like Charles Dickens and John Ruskin, “industrial England” conjures up murky skies, smudged streams, ashen smoke stacks and “the workhouse” in our minds.

Yet before industrialism smirched cities and economies, it was bound up with the optimism of the scientific revolution; philosophers, naturalists, doctors and scientists championed the understanding and manipulation of nature as a culmination of human reason. As naturalists parsed planetary movement and dissected animals, vegetables and minerals on earth, steel workers brought unprecedented symmetry and size to tools and engineers tapped the power of condensed gasses to harness unparalleled strength.

Similarly, Wright uses illumination in his paintings of the scientific enlightenment as a metaphor for the shock and thrill of discovery in a world full of hidden truths. Many of these paintings feature a central figure, the philosopher or scientist, demonstrating science in action as various onlookers—frequently commoners, young and old—react with great attention. Light always issues forth from the focus of the experiment or industry, and in its glow Wright invites us to read the reactions of those present.

For instance, in The Orrery (1766), the stern, broad-shouldered philosopher wrapped in crimson presides over a model solar system demonstrating planetary motion around the sun. Though blocked by a silhouetted observer, you can see the reflection of a candle on the bottom surface of the device. This flame represents the sun, and as the gears within “the orrery” revolve the model planets and moons around the solar center, the attendees watch simulated nights, days, and eclipses. 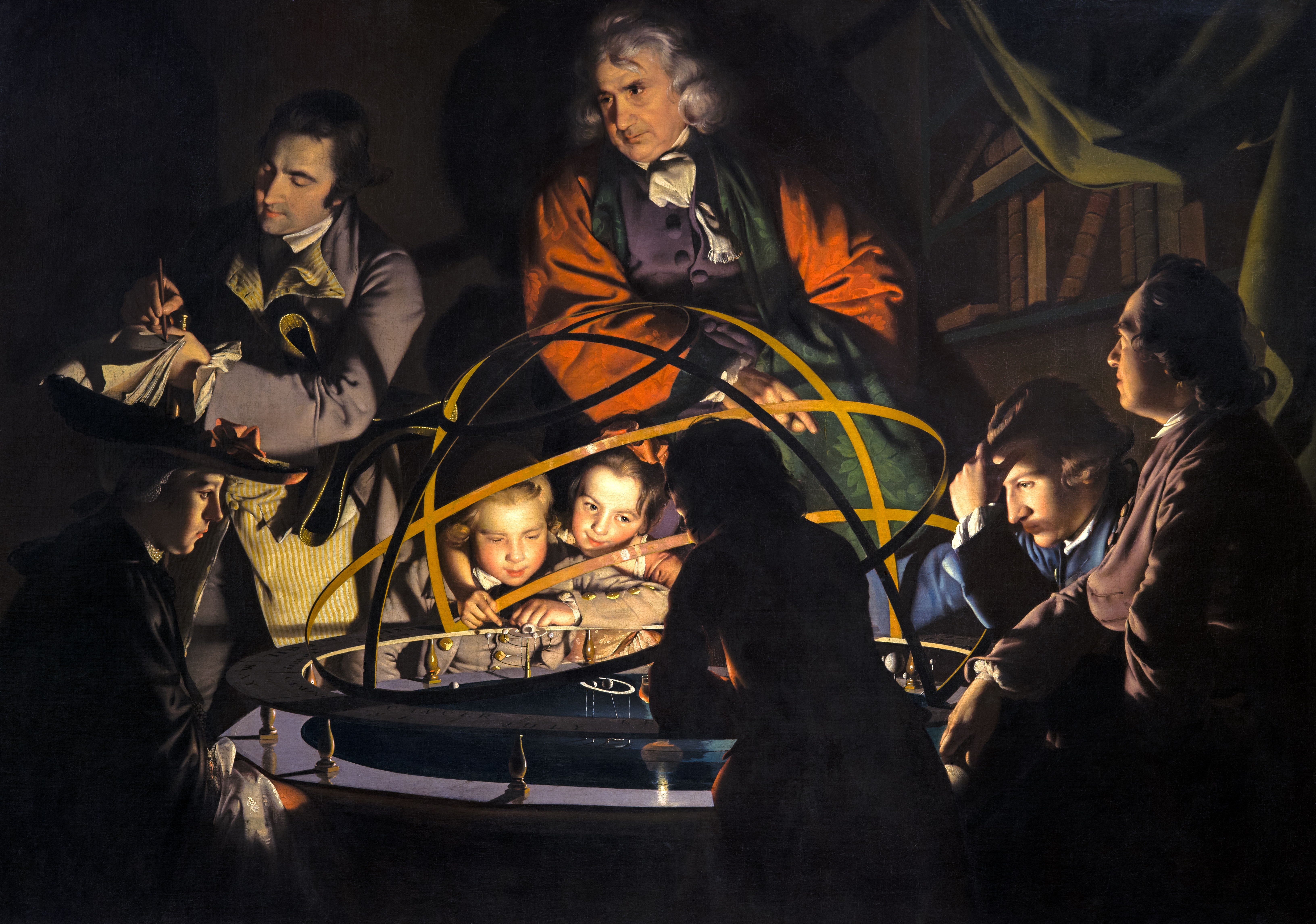 As a journalist at the philosopher’s left jots down the mysteries of the solar system, the man at the opposite side of the painting stares at the lecturer’s casual explanation. The hatted woman below the journalist stares in prim fascination at the tiny sun. The gentleman opposite fixedly contemplates the rapid sunrises and sunsets greeted by the spinning marbles, while warmer excitement, though still intense, is expressed by the children who gaze at the planetary motions as they might watch an interesting anthill.

The children’s interest in Experiment on a Bird in the Air Pump (1768) is quite the opposite. In an intimate room another man of science—less stern, more eccentric, also in crimson and with a similarly Newtonian haircut—demonstrates a vacuum by pumping the air out of a sealed glass jar, relieving a white parrot of its air supply. With one hand, he beckons as if to us, welcoming us to join him in his complete power over the life of the bird, which he could restore to the creature with a twist of his other hand. Indeed, the key-shaped seal at the top of the jar echoes the phrase, “I hold the keys of death and Hades.” 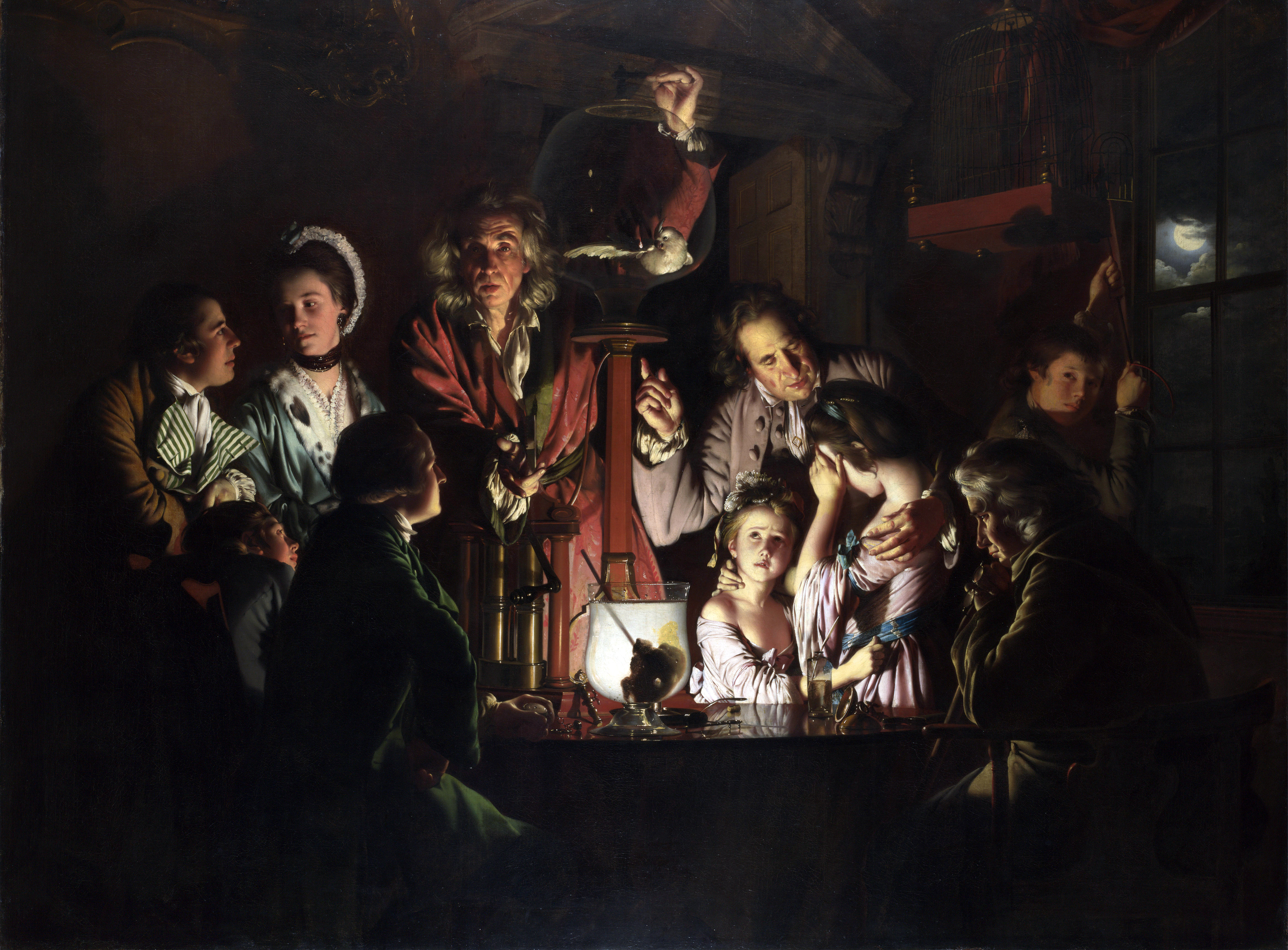 The candle in this painting is hidden behind a large beaker of translucent liquid, though the reflection of the flame is visible in the glass right in front of the bird’s face. While again the reactions are specific and varied, the most striking is that of the little girl gazing up at the suffocating bird. Gripped between fascination and concern, she is on the edge of her father’s reassurance. As she clings to her sister and holds back tears, this child represents the first of a generation that will always know the awful power of science. While the older viewers’ gazes range from excitement to contemplation to even disinterest, none but the children recognize the double-edged sword of this knowledge and pride.

Wright leaves an ambiguity to highlight how pivotal this moment of scientific illumination is: behind the gathering a boy stands at the window. Is he raising or lowering the curtain? Squinting at the empty birdcage, is he exposing the sacrifice of the chambered bird to the untamed but serene reality outside? Or is he lowering the curtain, dividing knowledge and experiment from wisdom and experience? Is he seeking light, or shutting it out?

Science, like the radiant but tiny candles in these paintings, is a beautiful attempt to discover truth. But without the higher, brighter light of faith in God’s loving purpose for the world, scientific progress is only another echo chamber of the human pride that ends in death. In this century of exponential technological advancement and deeper exploration of the universe, may we walk by faith in God’s ultimate restoration of reality, holding the brief candle of our own understanding against the Light of the world.

We selected these two images highlighted here to help show the response of the clergy to scientific advances during the enlightenment. Read about how the church fostered science in Christian History magazine issue #134 on Science and Technology. Subscribe to receive future issues in print here.