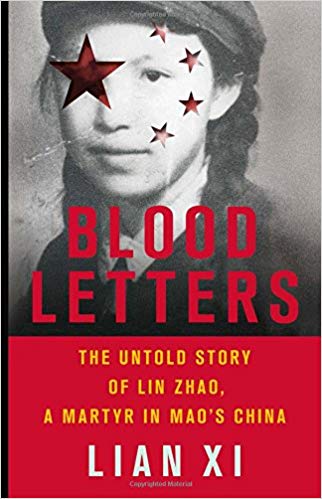 Until I saw the review copy of Blood Letters, I confess I had never heard of Lin Zhao. Once I opened it, I had to force myself to put it down. Although I was familiar with the stories of Watchman Nee, Wang Ming Dao, Cardinal Kung, and a few other oppressed Chinese Christians, no account I had read was presented with the raw detail and emotion of Lin Zhao’s biography.

Lin Zhao was raised a Christian. She never renounced Christ but, horrified at the atrocities of the governing Nationalists, sided with the Communists, believing their promises of a rosy, peasant-friendly future. Well-educated, she used her knowledge of Chinese literature, especially poetry, to produce idealistic propaganda.

After Mao seized power, disillusionment began to set in. She found that freedom of speech rapidly eroded. Soon she was in trouble and sent for re-education. Party representatives at the local level used their petty authority to sexually harass her and to topple opponents with lying denunciations. She vacillated between hope and despair for the Communist party, eventually becoming a "reactionary" and resistor. She helped produce underground resistance papers and wrote for them.

Imprisoned, she followed the time-honored Chinese practice of writing protests and letters in her own blood. Some of her productions were elaborate and lengthy, others pithy and to the point. Somehow she managed to survive, despite her defiant refusal to conform, and despite her tuberculosis. She found strength in her childhood faith as she experienced denunciations, torturous handcuffing, exposure, hunger, beatings by fellow inmates (urged on by authorities), and solitary confinement. More than once she tried to commit suicide: "as an exclamation point in the epic of the struggle of free humanity," she explained.

Nonetheless, she sang hymns in her cell, held solitary Sunday services, and leaped up to defend God when Christians were maligned. She wrestled with the Christian call to forgive one’s enemies in light of the monstrosities of Mao and his henchmen, seeing some sparks of humanity in them, callused though they had become. One of her last writings spoke of her struggle to set aside her self-will under Christ's lordship.

On 29 April 1968, she was taken from a hospital bed in her hospital gown and shot. As was common in such cases, the government presented her family with a bill for the bullet. By law her writings had to be preserved by the prison authorities. Many pages were released eleven years later during Chairman Deng Xiaopeng's reforms, which removed the stigma attached to many former "rightists."

Lin Zhao's blood letters spoke for millions who perished in China during the Red takeover and subsequent Cultural Revolution. The millions did not have her classical eloquence to record their resistance against the Maoist regime but, like Lin, they gave their blood.

I recommend this book for anyone who wants to immerse themselves in Chinese culture and get a sense of the sufferings of the Chinese under Communism. And I recommend it as a sobering antidote for all those who believe Communism is the answer for America or too-glibly leap onto the bandwagon of political correctness. Lin Zhao's story demonstrates how incredibly precious is freedom of thought, faith, and action.