We as humans are like dry grass, we can wither away at any moment, we are never far from death, indeed it is as if we are already living in the grave.—John Calvin (CO 32.66)

John Calvin saw death daily.  In his day people regularly died in the streets, many babies died at birth, and dead bodies could be seen carted away in the city or left lying where they fell on European battlefields.

More significant for Calvin himself, however, was the death of his mother, Jeanne, in 1515, leaving him motherless at six. The death of a six-year-old’s mother has an enormous emotional impact, whether the child lives in the twenty-first century or in the sixteenth century.

As an adult, Calvin was struck by the death of the only child he and his wife, Idelette, had together. On July 28, 1542, Idelette gave birth to a son who was baptized with the name of Calvin’s uncle: “Jacques.” The boy was premature, and he died prematurely as well, for Jacques passed away after little more than two weeks. “The LORD has given me a son, but He has also taken him away,” Calvin wrote. After only nine years of marriage, Calvin’s beloved Idelette also passed away. Calvin confessed to a colleague that he really had to do his utmost not to be destroyed by grief. One way he coped was to keep on working, for any pause in his labors would confront him with the loss. 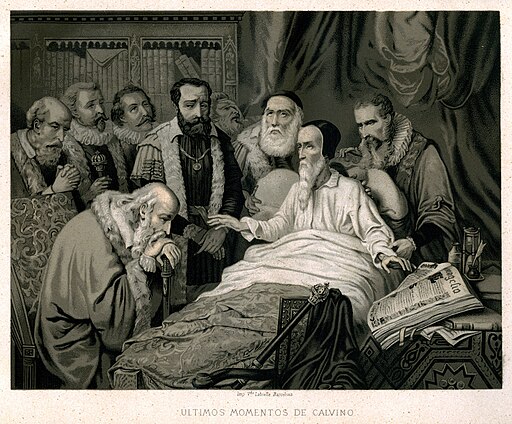 Besides the deaths of his mother, his son, and his wife, Calvin in his letters reports of the deaths of many who were dear to him.

Calvin tied into a well-known medieval song when he wrote that we are surrounded by death in the middle of this life. He knew what he was talking about, but with that same song he also wants to express his conviction that in death we will be surrounded by life: “For, on the contrary, in death we experience life, so long as God is holding our hand and providing our safekeeping.”

We can read this and be moved by these words of a man who is so often depicted as hard and emotionless. We can also feel relieved that we can enjoy the fruits of science in the form of modern medicine that can cure, medicine that Calvin and his contemporaries did not know.

But are we really so much better off? We step into planes, cars, and trains as if we are unaware of the accidents that can happen with these machines. We are – far more than in Calvin´s world—possible targets of criminal or terrorist actions. We have new diseases, some evidently of our own making.

Yet for all this, I tend to act as if I’m invincible, making  plans for events months or even years ahead. But, if I read Calvin not as a man from the past but as a fellow on the road, as brother in the faith, as a contemporary Christian, my perspective begins to change. The Genevan reformer reminds me that I also am just passing through. I also am just a pilgrim, every moment “only one step away from death.”

Calvin also reminds me that in the midst of death I may be sure to be surrounded by life in God. More awareness of my ultimate vulnerability brings me closer to God, making me more aware that in spite of all threats and dangers I can live life, enjoy life, and serve in life.

Herman Selderhuis is the director of Refo500, an international network for all kinds of projects related to the Reformation.