One 18th century citizen scientist envisions the cosmos with God at the center | Post by Max Pointner, CHM Image Researcher 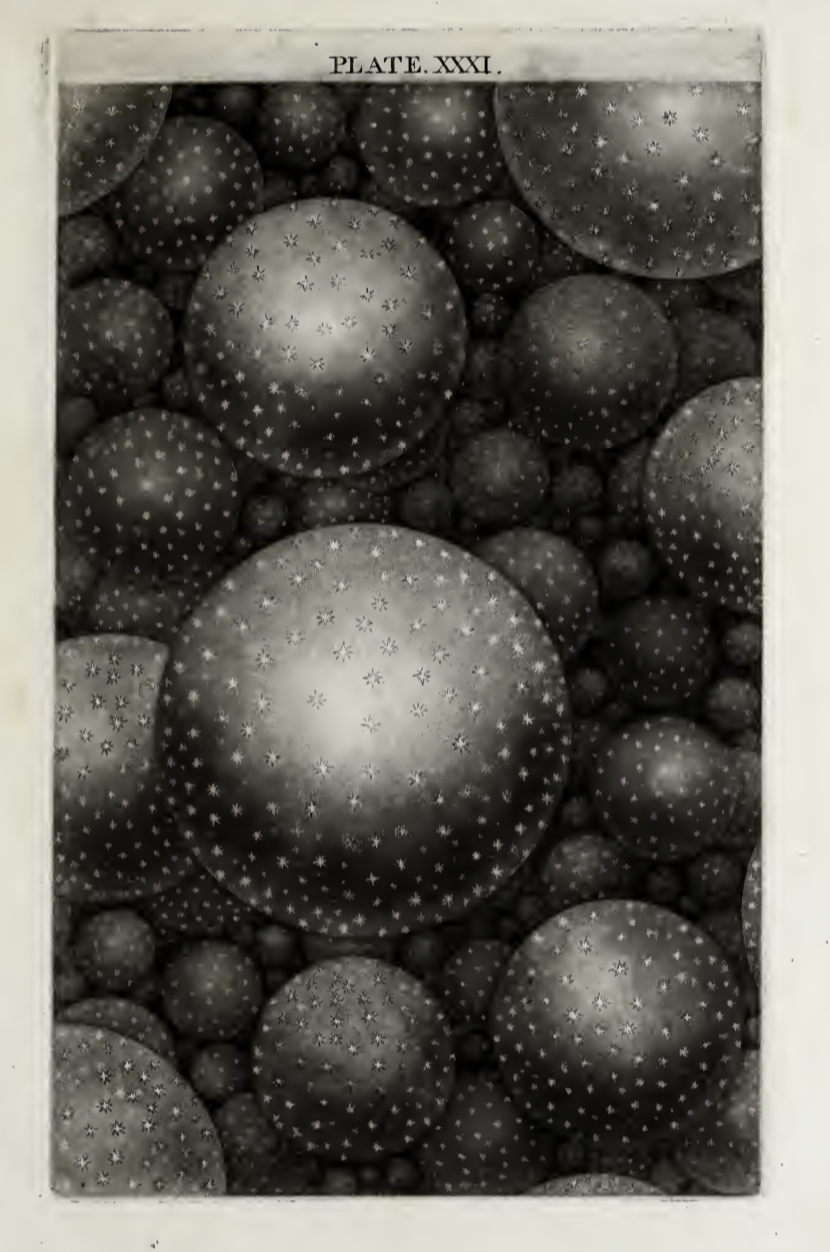 Perhaps my imagination was getting the better of me, or maybe I had read one too many science fiction novels. As I searched for images to tell the story of the church’s complex history with science I came upon one that was so bizarre, it sent unnerving chills down my spine. It looked like a sinister gum-ball jar: numerous dark spheres, reflective like gunmetal and speckled with starry points floating like weighty bubbles in a thick liquid. I first thought it was an early imaginative illustration of cells in a solution that looked disturbingly like a primal form of coronavirus.

However, what I first took as a 19th century depiction of microscopic organisms was in fact an 18th century attempt to imagine the most macroscopic thing in the universe (or, in fact, outside the universe): the multiverse.

This thrilling image from An Original Theory of the Universe (1750) is a launch pad for a tale of cosmological speculation, accidental scientific discovery, and scholarly intrigue that lends itself to the ever-continuing conversation about science and faith. Is there any case where theology should be scientific? Or where science should be theological?

Our story begins with a frustrated schoolboy in Durham, England. Born in 1711, Thomas Wright loved to learn, devouring every book he could find, exploring every detail he observed, and absorbing every mathematical equation his tutors could show him. However, hoping his son would find a profitable occupation, Wright’s father disapproved of the growing library in the house. To make matters worse, he was convinced his son’s speech impediment was caused by so much superfluous information entering his head. Many books were burned in the storm of his father’s doubts, and when he was 18 years old, Wright boarded a merchant ship to try his hand at a profitable trade.

But on the seas, Wright absorbed a new education in navigation and had plenty of time to observe the habits of the cosmos. Returning to England two years later, he started his own school, reentering the academic world he loved so much. Teaching mathematics, navigation, and astronomy, Wright became a respected tutor, drifting between aristocratic families.

By 1750, Wright had been a public intellectual and citizen scientist for almost two decades. Though he’d published a few astronomical papers, he was viewed by the scientific community as more a philosopher than a true scientist. But in this year, he published An Original Theory of the Universe, becoming the first person to describe the Milky Way as something we would recognize: a disc of stars surrounding an enormous invisible object. Originally drafted as nine letters to a skeptical friend, Wright combined his own observations and calculations with those of leading astronomers and physicists of the enlightenment and then steeped it all in theological poetry. The result was an imaginative cosmological model of everything. 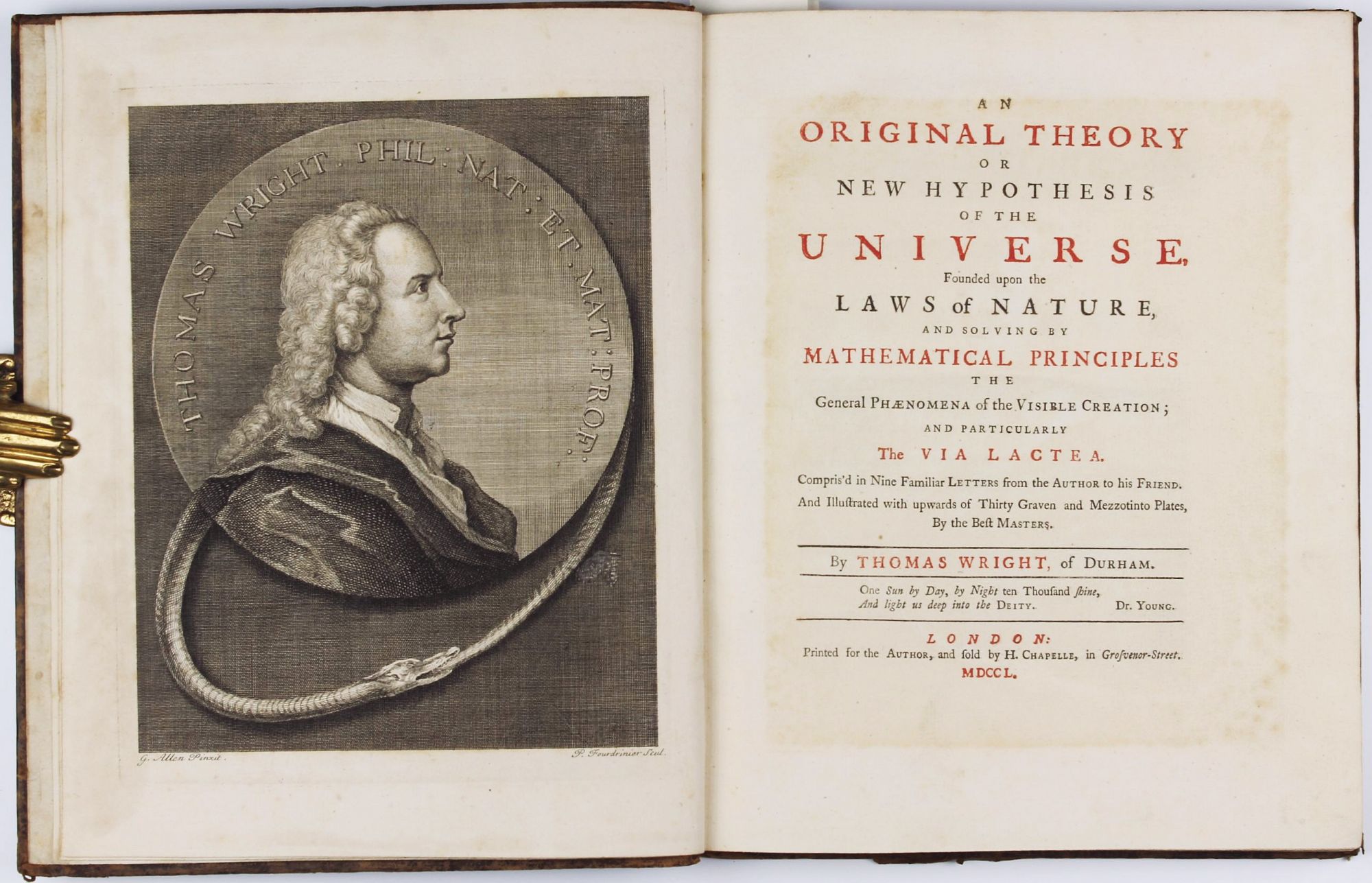 An Original Theory of the Universe is addressed to one who is not well schooled in mathematics, geometry, or scientific vocabulary, and the charm with which Wright presents his ideas to a lay person is beautiful. It also is what produced the work’s rich images. Of these “upwards of Thirty Graven and Mezzotinto Plates, by the Best Masters,” He writes:

“…I have purposely avoided, as much as possible, both here and every where, all complex Diagrams…. I shall therefore content myself with referring you to a few orbicular Figures, concave and convex, as may best suggest to your Fancy the simplest Way, a just Idea of the Hypothesis I have framed, and naturally enough I hope, render my Theory so intelligible, as to help you sufficiently to conceive the Solution aimed at.”

Plate VIII shows the planets in relative scale. Jupiter’s stripes are not bands of alternating cloud layers, nor do Saturn’s rings surround a gas giant, but both appear to be printed as cloudy continental planets. Plate IX beautifully shows the layers of exhaust that follow in the wake of a comet, and on a white background, Plates IV, V, and XVII show solar systems, which are usually seen in inky black. They look like atoms, with suns as nuclei, planets forming electron shells, and comets whizzing like electrons themselves.

In Plate XXVII, Wright asks the viewer to imagine that the sun is held in a shell-like layer of stars around some central celestial object. So, imagine that right above the letter “A” below is a dot representing the sun and its solar system (us!). Because we are inside the shell of stars, when we look along the planes of “D” and “E” we see a thicker belt of stars in the sky (the Milky Way). When we look towards “B” or “C,” we see not a cluster of stars, but just the few between us and the void inside or outside the shell. This is Wright’s first idea of what the galaxy, our “Island world” might be like. 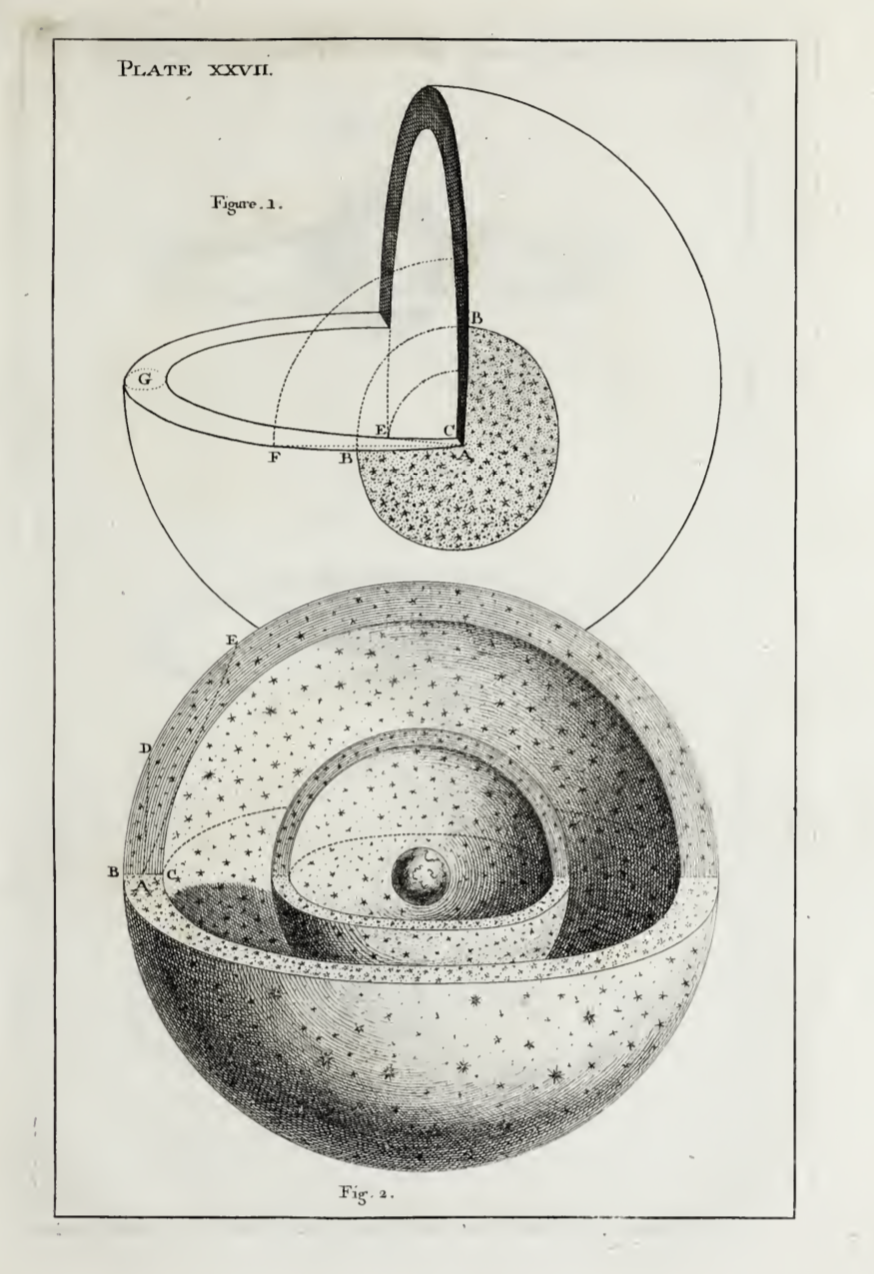 With the multiplication of these spheres like galaxies then, we are met with the dizzying image in Plate XXXI: an infinity of worlds; an ocean of island universes; the multiverse.

This is not Wright’s only theory. In fact, his alternative is closer to the current model of the Milky Way. Rather than a sphere of stars around a center, he pictures the sun as part of a ring of stars similar to the rings around Saturn (Plate XXVIII). In this second model, Wright even describes a center that resembles the supermassive black hole we assume holds our galaxy together. This “invisible,” “dark body,” must be an awesome place, where the rotation of every star is visible. “How awful and stupendous must that Region be, where all their Beams unite and make one inconceivable eternal Day?”

This is where Wright made the scientists of his day and critics since cringe. Looking for a clear theological connection between the physical and the metaphysical, Wright asserted that these centers were where God “resides in a sensible Magnificence,… here only, or in such Sensorium of his Unity, where he manifests his corporeal Agency, as in the Foci of his infinite Empire over all created Beings.” He even suggests that this dark body is the world to which believers will be caught up after death. Wright desperately wanted to place God in the literal center.

He was not only looking for the finger prints of a loving creator, but the image of the creator Himself somewhere within the conceivable universe. Wright is oozing with gratitude for his reason and ability to plumb the deep realms for God, but may have lost sight of the fundamental truth of our faith: The Incarnation. God’s self-portrait is not nature, it is actually Himself.

Wright eventually abandoned his theory of “island worlds,” the first theory of galaxies, when he couldn’t reconcile his point about Divine Centers with the latest observations. Nevertheless, perhaps Wright’s goal was never to find an absolute theory. “In Astronomy, as well as in natural Philosophy, though we cannot positively affirm every thing we say to be Facts and Truth, yet in so noble and sublime a Study as that of Nature, it is glorious… even to arrive at Probability.”

Indeed, while we must not excuse Wright’s conflation of physics and metaphysics, we certainly can affirm his joyful attempt to show our place in the light of a loving God using the rational tools available to him, with surprisingly accurate results! Wright shows a robust joy in his exploration and imagination of God’s universe, which was perhaps his real goal all along.

Can't get enough of science and faith? Read about others whose faith enriched their scientific studies in issue #134: Science and Technology.