On the cool hillside in the little-known area of Bura, in a somewhat remote part of the picturesque Taita Hills, stands the 125-year-old Bura Catholic Mission. It was in this rural village of Bura that missionaries first introduced Christianity to the remote inland area and built the Catholic Church called Our Lady of Good Hope. 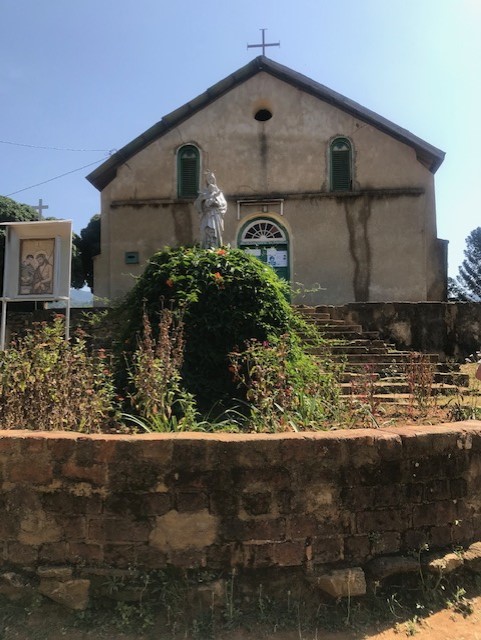 How the mission came into being

The European scramble for Africa was not only a political phenomenon but also a religious one with a variety of European missionary groups competing intensely to divide and occupy Africa for their respective churches.

Towards the late 19th century the Holy Ghost Fathers, a missionary society, was seriously committed to evangelization and aspired to introduce Catholicism into the African hinterland. They identified Kilema in the Moshi area as their destination and were journeying from the Mombasa Mission passing the Taita Hills area as their route to Tanzania. It is believed that priests from Alsace, who were travelling in the caravan to Tanzania to complete the Kilema Mission, were scouting for building equipment and porters to carry the loads and found most of them in the Taita-Taverta region. When they stopped over at Bura they were attracted by the scenic countryside, the pleasant climate and the warmth and hospitality of locals, especially the local official known as Chief Mbogholi.

The missionaries contacted the head of the Mombasa Parish, Bishop De Coumont, enthusiastically describing their find. He arranged to move up to Bura to plan the construction of the mission that would serve as an excellent halfway-house between the Mombasa and Kilimanjaro missions for other missionaries to rest at on their future arduous journeys into the interior.

When De Coumount’s idea was approved he set off to begin construction. He traveled by foot, with a caravan comprising of one Muslim leader, six askaris (soldiers) and sixteen porters each carrying a 40kg load, taking 11 days to reach Bura. Together with his colleague Father Flick and the Taita chief, Mbogholi, they spent time scouting the area for an ideal location for the mission. They chose a place in the shadow of the surrounding mountains near a flowing mountain stream.

On October 18, 1892, Chief Mbogholi announced that he was handing over 250 acres of land to the Bura Mission as a gift, but he later demanded payment and was given bales of calico cloth as payment. The initial buildings were a community house and chapel with the mission hospital following later in 1892.

During 1895 the construction of the main church was well on its way under the supervision of Brother Solamus; on 30th September 1896 the Bura Mission, named Our Lady of Good Hope, was completed and its first service was celebrated. One month later the first baptism took place and others soon followed, including the Chief’s wife.

In 1902, Sister Lumberta and four German Catholic nuns arrived at the Bura Mission, on foot, from Mombasa. They came to help Padre Mavel and his assistants Father Rohmer and Brother Zipper as teachers and nurses. The mission was administered by priests and nuns from the Precious Blood Order which originated from Alsace. Alsace was then considered a part of Germany whereas today it is a French region. They encountered strong resistance from tribe members who wanted to retain their traditional beliefs and practices. This made it difficult to convince them to convert. To overcome this resistance, the mission was generous with those who converted to Catholicism, allowing them to settle on prime pieces of land surrounding the mission. As in many parts of Kenya today, this has led to ongoing land settlement disputes.

Tragedy at the start of First World War

When the First World War broke out, tragedy struck the mission and despite their good community work, the German priests and nuns came under suspicion of possible sympathies with German infiltrators. The Bura Mission was closed by military decree on 2 September 1914. The priests were interned in a civilian camp in South India, the mission natives were sent to Lamu and the nuns were made to walk the 140 miles to Mombasa as punishment for allegedly harboring and caring for several saboteurs during the opening days of the war. On the perilous journey to the coast most of the nuns died after contracting typhoid fever from drinking water out of a contaminated well. 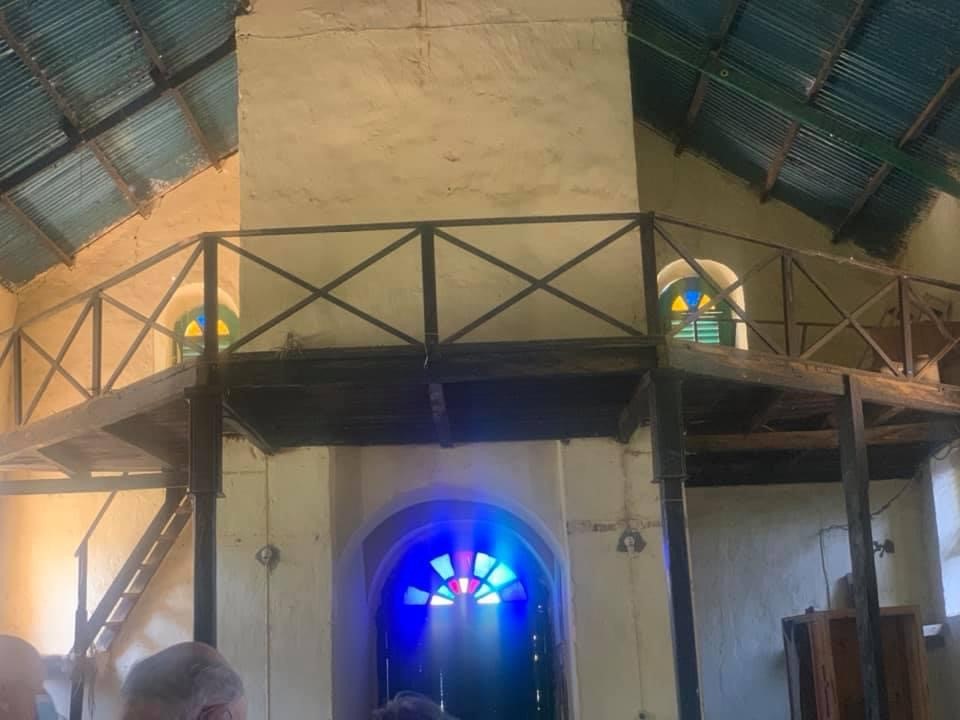 I visited the area in August 2021 using the tarred road that snakes its way up the contours of the mountainside with beautiful views of the Taita Hills. The area has a mixture of acacia trees, terraced farms on the steep hillside, patches of dense forest and banana groves which makes for a profusion of lush greenery. It was easy to see why the missionaries settled for this cool, green area after the humidity of the coast and the dry grasslands along the way.

The approach road brought us to the fine old church of the Bura Mission standing tall and overlooking the valley below. The grey, metallic statue of the Virgin Mary faces approaching visitors as if to guide them into the church. The building of 125 years still stands firm; however, the rusty roof and rotten timbers have known prolonged neglect. Some of the iron roofing sheets are still inscribed “to Bura via Zanzibar” as they were originally shipped from Antwerp in Belgium then came by dhow (ship) to Mombasa. The weather-beaten walls with patches of peeled plaster revealed small sun-fired adobe bricks, vouching for its age.

It was here that I learned that the still functioning church bell, dated 1897, came from Salzburg in Austria and that the glass, most of which is still intact, came from Alsace. The interior is not elaborate at all but has old paintings depicting the life of Jesus and the Virgin Mary alongside the Stations of the Cross as well as statues of Jesus, Joseph, the Virgin Mary and an attractive old sanctuary light. The focus point is the altar in the Sanctuary with a crucifix hanging above it. The current Mission superior, Father Mwanyasi, confirmed that the beautifully carved wooden altar is original as are the two smaller side altar tables. There are no pews, but rough-hewn wooden benches, kneelers and confessional booths; the holy water font is a large seashell embedded into the wall. The simplicity of the ancient interior is enhanced by the filtered hues from the stained-glass windows that evoked a sense of peace and tranquility. Sadly, the rickety wooden stairs leading to the choir loft were rotten and condemned so we could not climb up to see the original bell. 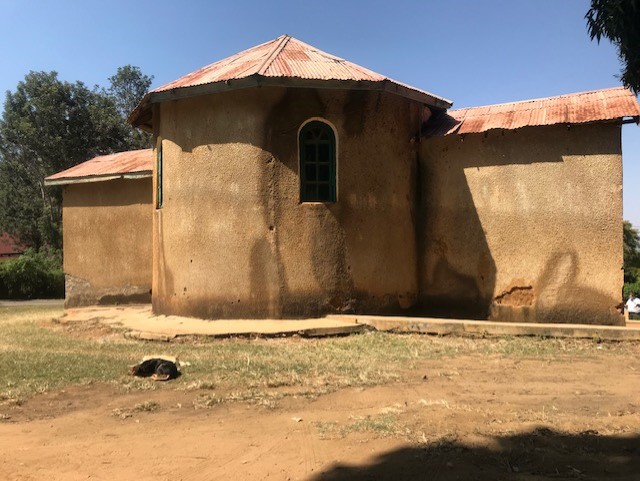 Today the mission remains active and is no longer a halfway house, but a full-service mission; through the church the community has benefitted especially in the education of young women. An orphanage, mission school and two formal educational institutions have evolved – Bura National High School for Girls and St Mary’s Teachers Training College.

On my recent visit I met the young parish priest, Father Sebastian, who explained that because the old church could only accommodate 200 worshippers and was unsafe, a larger church has been built across the street. The congregation is very active with over 500 worshippers because of all the young students in the area. The old church is still used for Sunday School and women’s support groups and has now been declared an historical site and established as a pilgrimage center.

In a Standard newspaper article in November 2013, the Catholic Diocese of Mombasa Vicar General, Wilbard Lagho, is quoted as saying “We have promoted the church to be a Centre for pilgrimage where the faithful can hold special prayers. It will also serve as an important historical monument … a tourist attraction. There were a lot of happenings in this church and the conversion of the church into a pilgrimage centre and historical site will add value to the lives of the local community.” In 2020 the Bura pilgrimage and ordination of five priests was celebrated. 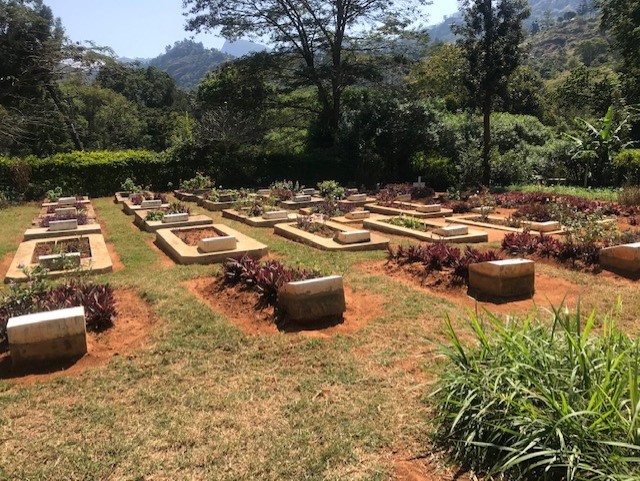 At the end of our visit Father Sebastian walked us to the very peaceful cemetery situated amongst the trees in the garden overlooked by the Taita Hills. Reading the tombstones, I realized that the nuns enjoyed longevity, except for one—the oldest tombstone. 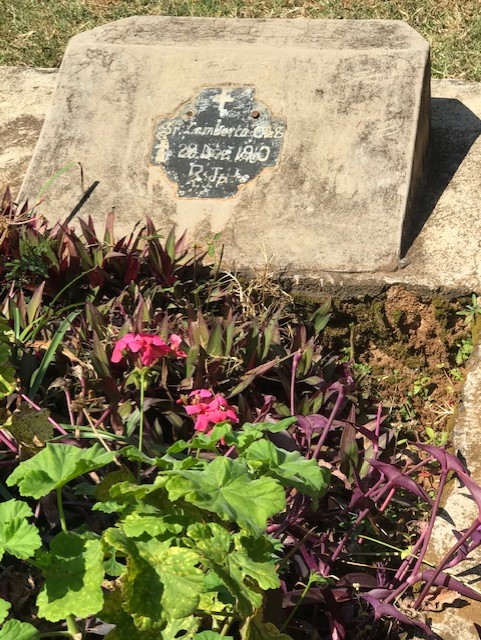 This belonged to Sister Lumberta who died on 28 December 1910: she was one of the German nuns who arrived at the mission in 1909, on foot, to assist Padre Mavel. She died a year later from an unspecified illness while on her preaching and healing mission. There was a sense of love in the quiet, cared-for cemetery, allowing us to reflect on how much the missionaries have been appreciated for their commitment to helping a community so very far away from their homelands.

Diane McLeish is a freelance writer and a retired school teacher living in Kenya. She has traveled extensively in sub Saharan Africa.