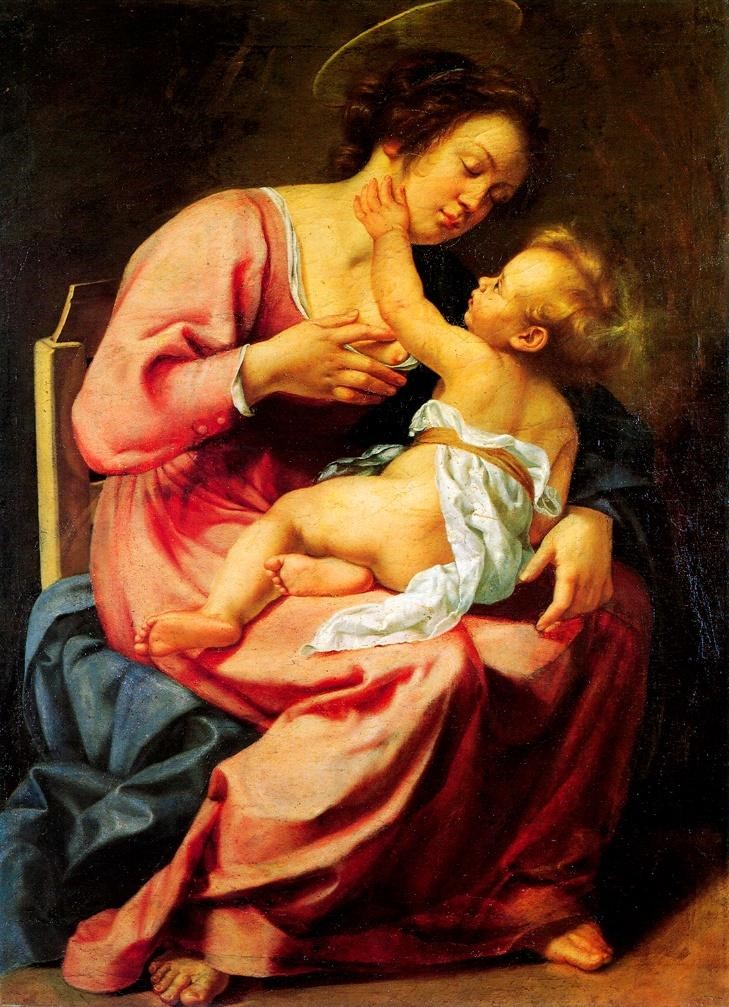 I “met” the Italian Baroque painter Artemisia Gentileschi my freshman year of college in a Reformation history class. By the end of the course, I felt as if Artemisia and I formed a friendship across time. Our friendship radically deepened when I researched her elusive and under-studied Madonna and Child painting. Painted in 1613, Artemisia’s Madonna and Child provides us a lens to see how Artemisia and Mary related to each other and how I, also as a sexual assault survivor, can learn from them.

Who is Artemisia Gentileschi?

Artemisia Gentileschi was born in 1593 in Rome, Italy. Her father, Orazio Gentileschi, was a painter, and he helped her pursue the same career in a field (unsurprisingly for the 1600s) controlled by men. In 1611, at the age of seventeen, Artemisia was sexually assaulted by her painting tutor, Agostino Tassi. After initially promising to marry Artemisia to correct his wrongdoing, Tassi rescinded his marriage offer to Artemisia. Following these events, Orazio sued Tassi in a forced defloration trial. The charge was sexual assault of a virgin.

The court required the victim to declare pain, blood, and if possible, to be corroborated by witnesses. Additionally, the victim needed to prove that they had been a virgin, was no longer a virgin, and had refused to consent to sex. Artemisia described the “strong burning,” pain, and the desperate and failed attempts to “cry out” during the attack because of Tassi’s physical strength over her. Artemisia’s testimony was confirmed through the sibille torture. Artemisia’s hands were tied together with rope, intertwined and weaved between her fingers. A tightening device twisted the rope which cut into the base of her fingers while she was questioned about the events of the day of her sexual assault. During the torture, she repeated the phrase “it is true” over and over. Artemisia stated, in the presence of Tassi, that her newly-formed scars resembled rings, was “the ring that [he] gave [her].” The sexual assault and the trial would go on to shape Artemisia’s life and career as a painter.

Throughout the trial, Tassi made attempts to cast doubt on the credibility of Artemisia. He made several unsubstantiated claims against the virginity of Artemisia. During the trial, Artemisia received a pelvic exam, and midwives examined her hymen in the courtroom to determine if she had been “deflowered.” The midwives agreed that Artemisia was no longer a virgin. Ultimately, the court ruled in favor of Orazio and Artemisia, but within a few months, Tassi managed a retraction of the ruling with the help of wealthy benefactors.

In 1613, Artemisia completed a painting of Mary and the baby Jesus. Not usually considered one of her more impressive works, not much has been written about this painting. And yet, Artemisia’s Madonna and Child provides us a window into understanding Artemisia’s life. A year after her trial and two years after her sexual assault, Artemisia turned to Mary. Some scholars dispute the year of 1613, claiming the painting is a slightly earlier work, but there is compelling evidence for the 1613 year. Artemisia’s painting prompts us to ponder similar connections to Mary and ultimately the person of Jesus Christ.

Who was Mary to Artemisia?

With these dates in mind, we allow ourselves to imagine and reflect on how the person of Mary and the person of Christ were ministering to Artemisia as she wrestled with events of her life. Yes, Artemisia is known for painting strong biblical and mythological women, but do we consider Mary, the mother of God, to be one of these women? And if we do, how do we imagine the virginal mother as a person of solidary with a sexual assault survivor like Artemisia? Like me? What does Mary have to offer sexual assault survivors? The power of Mary’s story doesn’t come primarily from its similarities to Artemisia’s story, but it comes from the differences. Artemisia’s Madonna and Child reminds us of agency, the honor bestowed to women, and redemption in the midst of shame.

In modern Protestant conceptions of Mary, we often imagine her as a passive character in the story of the incarnation. We reduce her role to that of a simple vessel for Jesus to enter the world and sequester her to Christmas time. Artemisia’s engagement with the story of Mary shows us how we can engage her story as well.

Mary freely consents to God working through her. The Holy Spirit didn’t force impregnation upon Mary. The Holy Spirit didn’t assault Mary. All three traditions of Christianity (Protestant, Catholic, and Orthodox) believe that Mary willingly consented to God. In the book of Luke, when the angel Gabriel comes to see Mary, he explains Mary will conceive and bear a child named Jesus. It is worth noting Gabriel states this in the future tense. God hasn’t already impregnated Mary without her knowledge. Gabriel goes on to proclaim who the child will be: “the Son of the Most High,” he will reign forever, and “his kingdom there will be no end.” Mary doesn’t immediately respond with an enthusiastic “yes,” but she asks Gabriel “how this will be?” since she is a virgin. Her question to Gabriel is a clarifying question; Mary is gathering information to be able to make an informed decision. After Gabriel speaks again, Mary gives her answer—yes. Rather than leaving after his first declaration, angel Gabriel waits for Mary’s response of consent before returning back to the heavenly presence of God.

Mary’s decision to bring forth the incarnation of God, to give him his flesh, was bold and powerful. Mary was a woman that acted rather than acted upon. Mary’s “let it be to me according to your word” rings and resonates throughout her life of love and devotion to her Messiah and Son.

It might be obvious that sexual assault is unjust and therefore not of God. And yet, deep pain, trauma, and poor responses from people to such things can sometimes make it more difficult for us to remember who God is. As Artemisia was painting Mary holding the incarnate God, she was painting the result of the deliberate choice of Mary. Artemisia was not given a choice when Tassi attacked her. In the months following the vile action of Tassi and the prolonged trial, Artemisia must have stared at the person of Mary and Christ. She gazed upon the full deity of God in flesh and saw our example of God’s tenderness towards women and their agency. The small, outstretched hand of Jesus is an embodied reminder to Mary, and Artemisia, of the hand of God the Father extended to Mary to invite her into his redemption story.

In the months after Tassi’s assault of Artemisia, she painted a gold halo around the Mary of her Madonna and Child. Artemisia found herself as part of the future generations that would bless Mary. I imagine that Artemisia considered the context of Mary and how it was similar to her own. Perhaps by painting Mary’s halo, Artemisia contemplated how Mary was blessed and highly favored by God; how God loves his daughters like Mary—like Artemisia. Maybe she contemplated how Mary was not constrained by worldly bounds, but Mary followed the way of God. Artemisia spent years thinking and wrestling with the conception of honor, and perhaps she returned to the story of Mary and her honor. Perhaps Artemisia considered how she could follow the way of God rather than the ways of the world.

Who are Artemisia and Mary to me?

When I first met Artemisia and we formed our connection, I hadn’t realized why I would need her. The year after our encounter, I was sexually assaulted, and our conditions converged.

History has the ability to function like a mirror; when I look into the past, I can see myself more clearly. Not as a participant in the past story, but I see myself in the present, with my cultural assumptions in clear view. When I look to Artemisia, I see a woman of strength, resilience, self-awareness, and genius. And it was Artemisia’s engagement with Mary that had me consider how a first-century virgin could help a twenty-first century survivor of assault..

I have considered how Mary’s story displays consent, honor, and redemption to Artemisia and myself. But to push the point further, at the center of the story of Mary is the story of Jesus. One of the beautiful parts of Madonna and Child is how baby Jesus is placed in the center as a plain reminder of the centrality of Jesus in the gospel. Jesus tells me that my body is good through his redemption of all broken bodies, and he also gives honor to female bodies by entering the world through a female body himself.

Abby Key recently completed her Bachelor of Arts degree in History from Wheaton College, including an internship with Legal Aid for Survivors of Sexual Assault. She is pursuing a legal education.