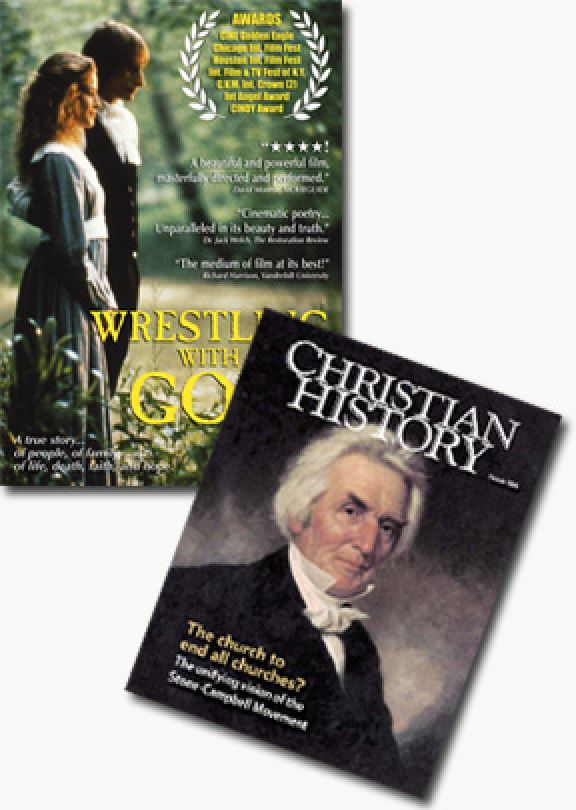 Includes the DVD Wrestling with God and issue #106 of Christian History magazine, on the Stone-Campbell Movement.

Wrestling with God (DVD) — ﻿Wrestling with God is an award-winning, dramatic exploration of the profound personal challenges and public pressures that helped shape one of the most celebrated public figures in 19th Century American religious and political circles. Alexander Campbell immigrated to America as a young man, disillusioned by the hypocrisy of the clerical hierarchy in the Old World. Here he faced a new country riddled with factious religious zealots of every description, all claiming their own brands of religion as the only acceptable path to righteousness. Campbell fought to pare away layers of man-made doctrine and rediscover God’s truth at its source: Holy Scripture and the elegant simplicity of Christ’s teachings. Wrestling with God opens doors to new spiritual journeys. Its compelling message is delivered by asking questions rather than imposing answers. It transcends denominational barriers and cuts to the core of faith. English and Portuguese language tracks and English w/Arabic Open Captions. Optional English and Spanish subtitles.

Christian History magazine, issue #106: The Stone-Campbell Movement — Known as "Restorationism" or "The Stone-Campbell Movement," this upstart Christian phenomenon swept into its fold thousands upon thousands of Americans in the early nineteenth century. It rejected all traditional churches, Protestant and Catholic alike, and aspired to become the universal church that would inaugurate the millennial dawn. In this issue of Christian History, see what happened when Alexander Campbell and Barton Stone decided to speak where the Bible spoke and be silent where the Bible was silent.