“It is necessary to make ourselves indifferent to all created things in all that is allowed to the choice of our free will.” Ignatius Loyola (1491-1556) and the Spiritual Exercises

The Spiritual Exercises Of St. Ignatius Of Loyola (1541). Translated by Fr. Elder Mullan, S.J. Introduced by Stephen Tomkins. Edited for the web by Dan Graves. 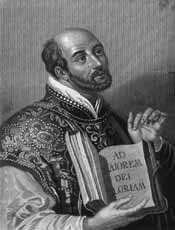 The Spiritual Exercises is certainly the most important, famous and influential writing of the Counter—Reformation, but it is not a reading book. It is a training manual for a four—week retreat, outlining the meditation exercises to be undergone for spiritual growth and strengthening the participants’ submission to God’s will.

The disciple meditates five times a day over the period, going through the same exercises each day of the week and moving onto a different subject the next week. The first week, the exercises are on sin; the second week on the Kingdom of Christ; the third on the passion; and the last on the risen Christ. The Spiritual Exercises form the basic training of Jesuits, but are also for lay people who want to benefit from some of the same training.

The extract below covers some of the exercises to be repeated throughout week 1. It includes the first exercise of the day focusing on “the first sins” of the angels, Adam and Eve. et al., the second exercise, considering one’s own sin, and the last exercise which is about Hell.

Ignatius started the first draft after a year of prayer and extreme penance in Manresa, Spain, in which he experienced a series of extraordinary visions. It took 18 years to complete the book and was first published, with papal approval, in 1548.

Spiritual Exercises To Conquer Oneself And Regulate One’s Life

The Principle: Man is created to praise, reverence, and serve God our Lord, and by this means to save his soul. And the other things on the face of the earth are created for man and that they may help him in prosecuting the end for which he is created. From this it follows that man is to use them as much as they help him on to his end, and ought to rid himself of them so far as they hinder him as to it. For this it is necessary to make ourselves indifferent to all created things in all that is allowed to the choice of our free will and is not prohibited to it; so that, on our part, we want not health rather than sickness, riches rather than poverty, honor rather than dishonor, long rather than short life, and so in all the rest; desiring and choosing only what is most conducive for us to the end for which we are created.

FIRST EXERCISE [At midnight] IT IS A MEDITATION WITH THE THREE POWERS [memory, intellect and will] ON THE FIRST, THE SECOND AND THE THIRD SIN

First Prelude. The First Prelude is a composition, seeing the place. In an invisible contemplation or meditation — as here on the Sins — the composition will be to see with the sight of the imagination and consider that my soul is imprisoned in this corruptible body, and all the compound in this valley, as exiled among brute beasts: I say all the compound of soul and body.

Second Prelude. The second is to ask God our Lord for what I want and desire....Here it will be to ask shame and confusion at myself, seeing how many have been damned for only one mortal sin, and how many times I deserved to be condemned forever for my so many sins.

First Point. To bring the memory on the First Sin, which was that of the Angels, and then to bring the intellect on the same, discussing it; then the will, wanting to recall and understand all this in order to make me more ashamed and confound me more, bringing into comparison with the one sin of the Angels my so many sins, and reflecting, while they for one sin were cast into Hell, how often I have deserved it for so many.

I say to bring to memory the sin of the angels, how they, being created in grace, not wanting to help themselves with their liberty to reverence and obey their Creator and Lord, coming to pride, were changed from grace to malice, and hurled from Heaven to Hell; and so then to discuss more in detail with the intellect: and then to move the feelings more with the will.

Second Point. The second is to do the same — that is, to bring the Three Powers — on the sin of Adam and Eve, bringing to memory how on account of that sin they did penance for so long a time, and how much corruption came on the human race, so many people going the way to Hell.

I say to bring to memory the Second Sin, that of our First Parents; how after Adam was created in the field of Damascus and placed in the Terrestrial Paradise, and Eve was created from his rib, being forbidden to eat of the Tree of Knowledge, they ate and so sinned, and afterwards clothed in tunics of skins and cast from Paradise, they lived, all their life, without the original justice which they had lost, and in many labors and much penance. And then to discuss with the understanding more in detail; and to use the will as has been said.

Third Point. The third is likewise to do the same on the Third particular Sin of any one who for one mortal sin is gone to Hell —— and many others without number, for fewer sins than I have committed.

I say to do the same on the Third particular Sin, bringing to memory the gravity and malice of the sin against one’s Creator and Lord; to discuss with the understanding how in sinning and acting against the Infinite Goodness, he has been justly condemned forever; and to finish with the will as has been said.

Colloquy. Imagining Christ our Lord present and placed on the Cross, let me make a Colloquy [conversation], how from Creator he is come to making himself man, and from life eternal is come to temporal death, and so to die for my sins.

Likewise, looking at myself, what I have done for Christ, what I am doing for Christ, what I ought to do for Christ. And so, seeing Him such, and so nailed on the Cross, to go over that which will present itself. The Colloquy is made, properly speaking, as one friend speaks to another, or as a servant to his master; now asking some grace, now blaming oneself for some misdeed, now communicating one’s affairs, and asking advice in them.

And let me say an OUR FATHER.

First Prelude. In an invisible contemplation or meditation — as here on the Sins — the composition will be to see with the sight of the imagination and consider that my soul is imprisoned in this corruptible body, and all the compound in this valley, as exiled among brute beasts: I say all the compound of soul and body.

Second Prelude. The second is to ask for what I want. It will be here to beg a great and intense sorrow and tears for my sins.

First Point. The statement of the sins; that is to say, to bring to memory all the sins of life, looking from year to year, or from period to period. For this three things are helpful: first, to look at the place and the house where I have lived; second, the relations I have had with others; third, the occupation in which I have lived.

Second Point. To weigh the sins, looking at the foulness and the malice which any mortal sin committed has in it, even supposing it were not forbidden.

Fourth Point. To consider what God is, against Whom I have sinned, according to His attributes; comparing them with their contraries in me —— His Wisdom with my ignorance; His Omnipotence with my weakness; His Justice with my iniquity; His Goodness with my malice.

Fifth Point. An exclamation of wonder with deep feeling, going through all creatures, how they have left me in life and preserved me in it; the Angels, how, though they are the sword of the Divine Justice, they have endured me, and guarded me, and prayed for me; the Saints, how they have been engaged in interceding and praying for me; and the heavens, sun, moon, stars, and elements, fruits, birds, fishes and animals —— and the earth, how it has not opened to swallow me up, creating new Hells for me to suffer in them forever!

Colloquy. Let me finish with a Colloquy of mercy, pondering and giving thanks to God our Lord that He has given me life up to now, proposing amendment, with His grace, for the future.

FIFTH EXERCISE [an hour before supper] A MEDITATION ON HELL

First Prelude. The composition, which is here to see with the sight of the imagination the length, breadth and depth of Hell.

Second Prelude. To ask for what I want: it will be here to ask for interior sense of the pain which the damned suffer, in order that, if, through my faults, I should forget the love of the Eternal Lord, at least the fear of the pains may help me not to come into sin.

First Point. To see with the sight of the imagination the great fires, and the souls as in bodies of fire.

Second Point. To hear with the ears wailings, howlings, cries, blasphemies against Christ our Lord and against all his Saints.

Third Point. To smell with the smell smoke, sulfur, dregs and putrid things.

Fourth Point. To taste with the taste bitter things, like tears, sadness and the worm of conscience.

Fifth Point. To touch with the touch; that is to say, how the fires touch and burn the souls.

Colloquy. Making a Colloquy to Christ our Lord, I will bring to memory the souls that are in Hell, some because they did not believe the Coming, others because, believing, they did not act according to His Commandments; making three divisions:
1. Before the Coming
2. During His life
3. After His life in this world
And with this I will give Him thanks that He has not let me fall into any of these divisions, ending my life. Likewise, I will consider how up to now He has always had so great pity and mercy on me.

I will end with an OUR FATHER.

Module 309: Teresa of Avila on Prayer