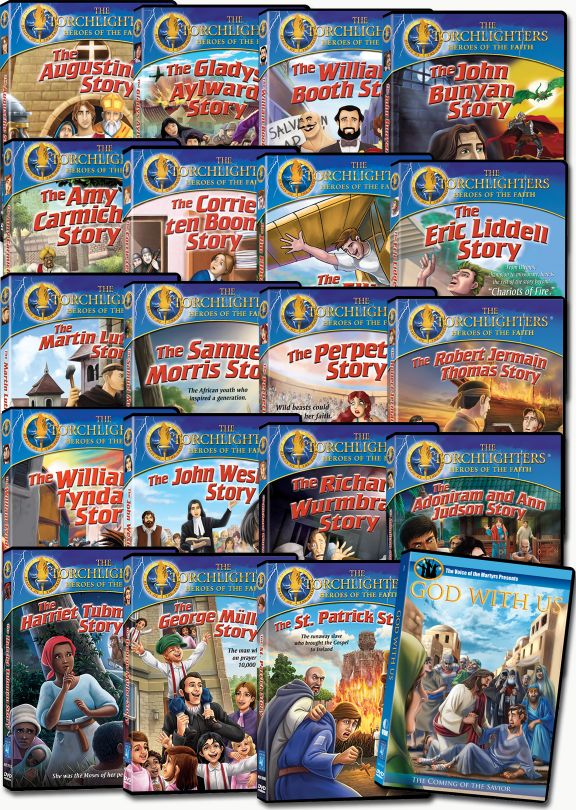 The Torchlighters is an ongoing series of animated programs with strong values and educational content for youth ages 8-12. Each Torchlighters episode presents the story of a true-life hero from Christian history. For more information on the Torchlighters series, visit www.torchlighters.org.

William Tyndale - This episode follows William Tyndale's adventures as he works in secret, moving from town to town as a fugitive to avoid capture. Friends and allies help him along, but enemies may be lurking around any corner.

Perpetua - It is the year AD 203 in Carthage, North Africa. Perpetua, a young mother, is charged with converting to Christianity and is sent to prison. But her freedom can be secured easily. All she has to do is offer one pinch of incense in honor to the Roman gods to regain her freedom and return to her infant son and a life of comfort. What will she do?

Jim Elliot - Jim Elliot spent his youth preparing to share the Gospel with those who'd never heard it. But nothing could have prepared him for the dangers and challenges he'd face in the jungles of Ecuador. The remote Auca tribe was suspicious and antagonistic toward even the most friendly of gestures from outsiders. Would Jim and his fellow missionaries ever be able to break down the hostile barriers and carry a torch of faith to this savage people determined to attack all outsiders?

Amy Carmichael - As little Preena is snatched away and held in the temple against her will. How will she find the missionary known as Amy Carmichael, the one who wears a cross and serves a different sort of God? Meanwhile, Amy is also consumed by the awful truth she has learned about the plight of the “temple girls.” Will Amy’s faithful determination be enough to free Preena from the powerful customs and superstitions that keep her hostage?

Richard Wurmbrand - In war-torn Romania, there is only one way for churches to get the protection of the government: give their support and allegiance to the communists who are in control. Instead, Pastor Richard Wurmbrand chooses to speak up for Christ, thereby placing his own life and the lives of his family in great danger. When Richard’s choice lands him in a communist prison, his faith and witness are tested to the limits.

Eric Liddell - Pressure to follow public opinion couldn't get much stronger. National hero Eric Liddell is Scotland's pride and joy. The entire country is eager for their running celebrity to sprint past the rest of the world and bring home Olympic gold in the 100-meter race. But when Eric makes the stunning announcement that he won't race on Sunday because of his religious convictions, he is soon labeled a disgrace and a traitor. See how Eric Liddell's famous stand during the 1924 Olympics prepares him for even greater challenges as a missionary to China during World War II.

William Booth - Introduce children to the action-packed story behind "The Salvation Army" and its founder, William Booth. The pub owners and their hired thugs are ready for William and his ragtag followers when they come marching into London's East End. With clubs and rocks, the thugs are set to chase this preacher out of town once and for all. Armed only with Bibles, musical instruments and their unflinching faith in God, they march in to face their most dangerous opponents so far.

Augustine - Young Augustine thinks his mother’s religion is foolishness. Soon Augustine finds himself in an important position as “The Voice of The Emperor." When the empire decides to take over the Christian basilica, Augustine prepares to give the speech of a lifetime, one that will slow the rising tide of Christianity’s influence. With his devout mother and Bishop Ambrose on one side and angry, armed soldiers on the other, Augustine must choose whom he will serve.