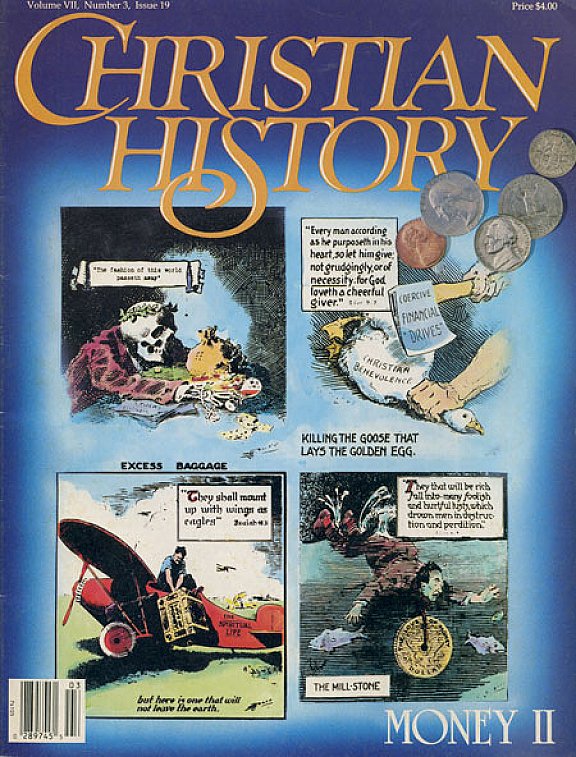 Money in Christian History (II): From the Publisher

Jesus spoke more about money than he did any other subject.

The Tribute Money by Masaccio

A new look at a famous painting.

Money quotes with a Christian slant.

The Urge for Poverty

Christian Asceticism from the Early Church Through the Reformation.

The Monastic Life: Benedict of Nursia

What the founder of the Benedictine monks had to say about money in his famous Rule.

That Which God Hath Lent Thee

The Puritans and Money

The Puritan Critique of Modern Attitudes Toward Money

Puritans are often charged with having been the origin of modern attitudes toward money. Upon scrutiny, the things ascribed to Puritans turn out to be secularized versions of something that the Puritans only accepted in a context of supreme allegiance to God and obedience to Christian moral standards.

Money in Christian History (II): A Gallery of Good Examples Not to Follow

This issue’s Gallery could more aptly be called the Christian History Rogues Gallery. These unhappy tales from the past present good examples not to follow.

Dan Runyon and the Editors

Dates and Events Regarding Money.

From one of the world’s richest preachers.

Wesley’s answer to the tax commissioners.

This eloquent Baptist preacher of Victorian England was also loved for his earthy wisdom. Our text and engraving are taken from his popular writings John Ploughman’s Talk and John Ploughman’s Pictures. The homespun sage had much to say that, in his words, “would not suit well the pulpit or the Sabbath.”

The Benevolent Tradition: The Charity of Women

Through sacrifice, mercy, and charity, women down through church history may have given us our greatest examples of love demonstrated and proven through selfless giving and service to others.

From the Archives: Desiderius Erasmus

The Despising of Riches (c 1488) Based on the translation by Thomas Paynells, as it appeared in the Bethelet edition of 1533.

From the Archives: Menno Simons

From the Archives: Robert L. Dabney

From the Archives: John Woolman

A Plea for the Poor

From the Archives: Andrew Carnegie

For Carnegie, “the surplus wealth of the few will become, in the best sense, the property of the many.”

From the Archives: Dietrich Bonhoeffer

Jesus does not forbid the possession of property in itself.

St. Laurence and the Church’s Treasures

They were treasures, in whom Christ lives.