It Happened on DECEMBER 28 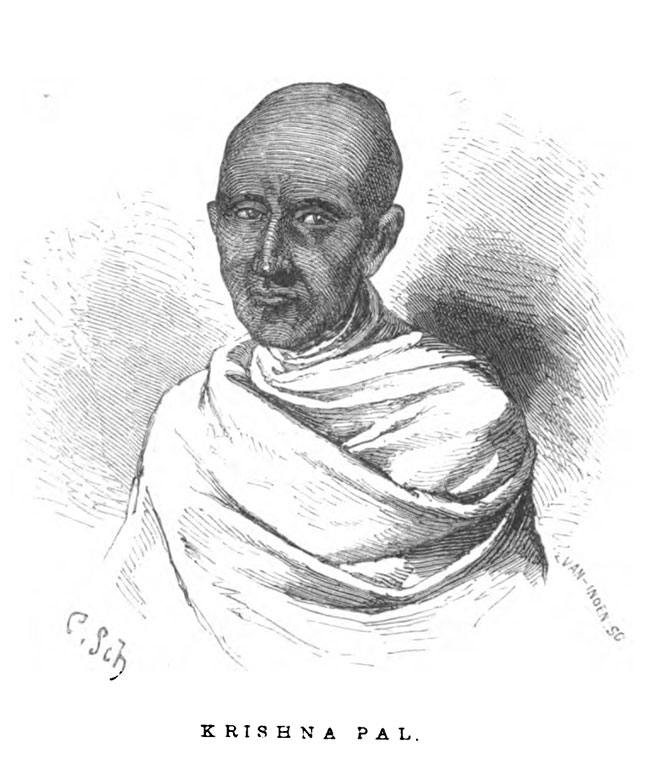 [Krishna Pal from The First Hindoo Convert: A Memoir of Krishna Pal, a preacher of the gospel to his countrymen more than twenty years. Philadelphia: American Baptist Publication Society, 1852.]

“KRISHNA, you have left off all the customs of your ancestors—what is the reason?”

Krishna Pal replied, “I tried the Hindu worship, but got no good.” By his own testimony he had performed all of Hinduism’s required works, such as worshiping idols, bathing in the Ganges, licking the dust of his guru’s feet, visiting holy places, giving property to priests, repeating the name of his guardian deity, and meditating on and singing Hindu verses. None of this had relieved his sins: “After a while I heard of Christ—that he was incarnate, labored much, and at last laid down his life for sinners. I thought, what love is this! And here I made my resting place.”

The story behind Pal’s faith began when he heard the gospel proclaimed, first in a street and then from Moravian missionaries for whom he did carpentry work. Injuring an arm, he went to the Baptist mission in Calcutta to have it treated. The doctor set the dislocated bone and told Pal of a far more serious condition—sin. Pal wept and believed. A month later, on this day, 28 December 1800, Baptist missionary William Carey baptized him in the Ganges. The ceremony was conducted in the Bengali language before many curious onlookers. Carey advised the crowd that the baptism was not effective because the river was considered sacred, but because Christ took away sins. Carey and his associates had labored seven years for such a conversion. William Ward, one of them, wrote in his Journal, “Blessed Day!”

Afterward, Pal, a Brahmin, gave up his high caste to eat with the missionaries. Immediately he suffered persecution for throwing off his traditional rank. Afterward he would often be accosted on the topic: “Brother, you speak good words, and have much wisdom; but why have you thrown away your caste?”

Pal would reply, “The man who keeps his caste cannot obtain salvation. Men who have their caste are very proud, and he who is proud cannot enter into the kingdom of God.”

Burdened for souls, he soon began to preach. He poured himself into gospel work, preaching from one edge of India to another. During five years he was assigned to work in Calcutta he preached, on an average, twelve or fourteen times every week. He built a church there out of his own funds. He also wrote several hymns, including this one:

O thou, my soul, forget no more

The Friend Who all thy misery bore;

Let every idol be forgot,

Renounce thy works and ways, with grief,

And fly to this most sure relief;

Nor Him forget, who left His throne,

And for thy life gave up His own.

His death when it came in 1822 was from cholera. Unlike many of his Indian contemporaries, who died in terror, he died at peace, rejoicing in Christ.