It Happened on OCTOBER 31 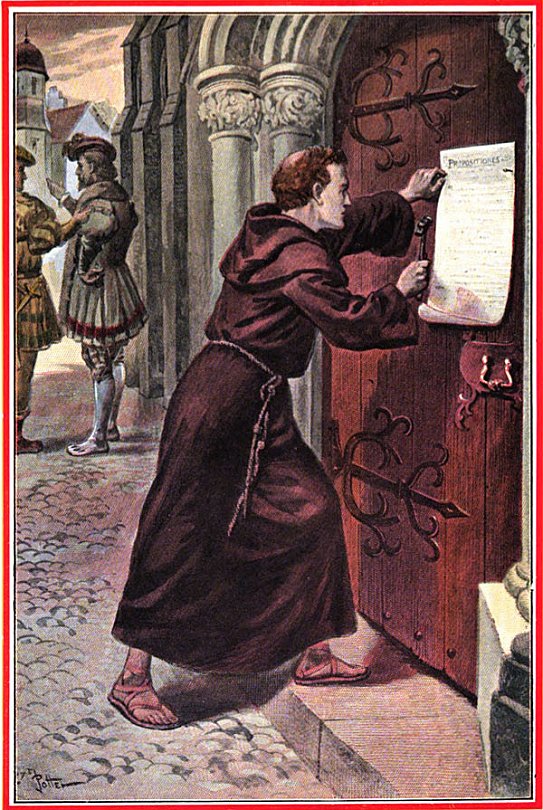 Martin Luther nailing his 95 theses to the church door.

ON THIS DAY, 31 October 1517 in Wittenberg, Germany, one of the most famous events in Christian history occurred. A priest named Martin Luther nailed a challenge to a debate on the church door. It consisted of ninety-five statements, or theses, against the practice of indulgences—theses which he was willing to defend. Scholars commonly issued such challenges in those days.

Indulgences at first were rare, consisted of shortening a penance imposed on a contrite sinner. They had become big business for popes, who sold them as a source of revenue. In the thirteenth and fourteenth centuries they came to be seen as removing actual guilt. By the sixteenth century, they were hawked as covering the sins of both the living and the souls in purgatory. The common folk bought them with this understanding.

Luther was appalled. “When our Lord and Master, Jesus Christ, said ‘Repent’, He called for the entire life of believers to be one of repentance,” he wrote. “Those who preach indulgences are in error when they say that a man is absolved and saved from every penalty by the pope’s indulgences.”

Johann Tetzel, a notorious peddler of indulgences, coined a jingle: “As soon as the coin in the coffer rings, the soul from purgatory springs.” Luther vehemently denied this. “There is no divine authority for preaching that the soul flies out of the purgatory immediately the money clinks in the bottom of the chest.” The more likely effect was “avarice and greed.” Against Tetzel’s loose interpretation, Luther insisted, “The pope’s pardons are not able to remove the least venial of sins as far as their guilt is concerned.”

Thanks to the newly prolific printing press, copies of Luther’s theses were circulating everywhere in that region within a week and generating heated discussion. For Luther, who had recently come to an understanding of justification by faith, indulgences were wrong. Christ’s blood, not money, purchased pardon from guilt. Eventually the debate resulted in a split in the church. His posting of the Ninety-five Theses has been seen ever since as marking the beginning of the Protestant Reformation.

Watch a vivid portrayal of Luther's transformative struggle with the teachings of the church, Return To Grace: Luther's Life and Legacy