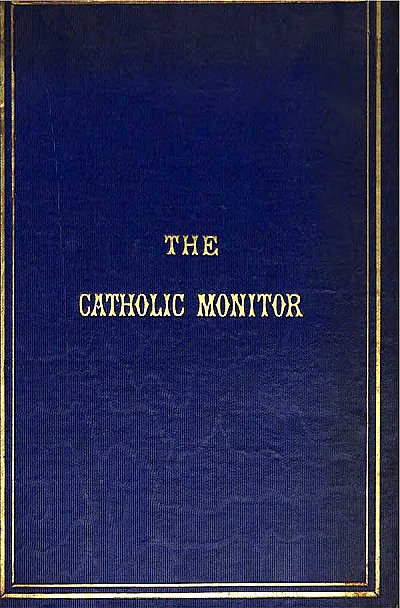 Cover of The Catholic Monitor

See what kind of love the Father has given to us, that we should be called children of God—1 John 3:1 (ESV).

How great the dignity, honor, and happiness of being the sons of God! He has taken many of the sinners of our guilty race from the family of Satan, and of a present world; and, by adopting and regenerating grace, has brought them into his own family. They are now called his children; and, in calling them his children, he makes them so. In consequence of their union to the Lord Jesus Christ, and in virtue of it, believers are constituted the children of God, invested with the noblest privileges, made “heirs of God, and joint heirs with Jesus Christ.” Their sins are pardoned; they are clothed with the righteousness of the Lord Jesus Christ, their elder brother; they are under his special protection; he provides for them in all respects; he instructs them, and gives them wholesome correction. Angels are appointed to minister to them as “the heirs of salvation.” Heaven is prepared for them as their eternal home; and the Spirit of their heavenly Father dwells in them as “the Spirit of adoption,” under whose influence they cry, “Abba, Father,” and maintain a delightful intercourse with God as their Father in Jesus Christ.

How great, how distinguishing, how sovereign and free, the love of God to sinners of our race, in thus making them his children, and dealing with them as such! The vileness of their natural character, and the abundant mercy he bestows upon them, demonstrate the riches of his love and grace passing all our comprehension. May I be a happy partaker of this love! May it ever fill me with admiration! May I ever live under the sweet and lively impression of it, and under its influence, in all holy obedience!

Rev. J. [John] Craig (d. 1851) was the first minister at Avonbridge, near Falkirk, Scotland, where he served forty-seven years until his death at seventy-one. In 1819, he published The Scripture Monitor. Col. J. A. Robertson made selections from it, which he edited and published as The Catholic Monitor, evidently to stress its usefulness to the church universal, for the title page says “suitable for all Christians.”

[J. Craig and J. A. Robertson.] The Catholic Monitor; being meditations for the morning and evening of every day of the month, selected from the work of Rev. J. Craig. Edinburgh: John Maclaren, 1864.